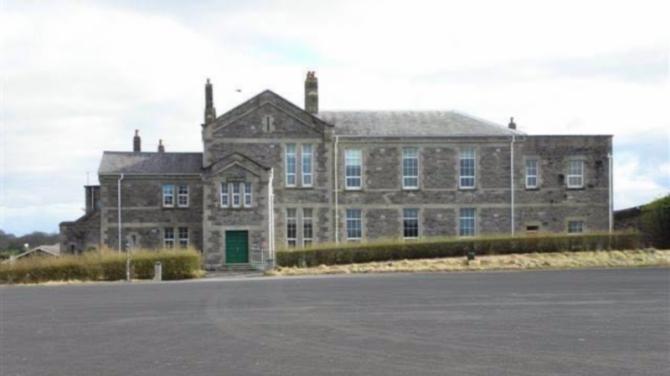 FORMER Omagh Town district councillor and West Tyrone MLA., Ross Hussey, has raised concerns at the lack of progress in relation to the St Lucia Barracks site in Omagh.

Mr Hussey, whose parents both served in the Ulster Defence Regiment based in St Lucia Barracks, attended courses in the barracks during his time with the Royal Ulster Constabulary.

His late grandfather served in the Royal Irish Fusiliers from 1905 to 1926 and was transferred to the Inniskilling for his final years of service.

So for nearly a century his family have had a connection with St Lucia.

In a statement to the Tyrone Constitution, Mr Hussey said: "The buildings on the St Lucia site are listed, yet no one seems to be maintaining them, and I am convinced that as heating is not on the internal structure, it must be a complete mess. I have seen photographs which suggest the former officers mess is just that - ‘a mess’ inside. The former Corporals mess had plants growing through the window and I’m sure they have caused severe internal damage.

"During my political life, I often referred to St Lucia as the ‘jewel in Omagh’s crown’.

"As a councillor from 2005, I regularly took part in discussions as to the future of the barracks and as far back as then part of the Omagh Masterplan was to incorporate St Lucia into the town.

"We had hoped that the Review of Public Administration would have given us a West Tyrone council incorporating Omagh and Strabane with St Lucia as the corporate headquarters.

"I asked written and oral questions, I attempted to get use of the barracks in 2014 to commemorate the centenary of the commencement of WW1 and the brave soldiers of the Inniskillings who marched through those gates on their way to the railway station to travel, in some cases never to return, to the Western Front and the horrors of war, but the request to use the site was declined by OFMDFM siting the usual ‘cover all’ of health and safety.

"I managed at one stage to get in to allow members of the ‘Skins Association to lay a wreath at the memorial within the wall.

"Attempts were made when I was a councillor to remove the memorial from Omagh to the museum in Enniskillen and I fought and argued for its retention within the barracks which is where it should remain. A lot of the plaques memorials etc were removed - some held safely and sadly some dumped.

"This barracks is and always will be part of Omagh. Many families, like my own, are in Omagh because a forefather served in the British Army.

"My grandfather having enlisted in Monaghan was discharged in the town nearest to where he enlisted and as the Free State was not part of the UK, Omagh was where he was discharged and he made a life for his family here in Tyrone.

"Many men from County Donegal, Londonderry, Tyrone Fermanagh, Cavan, Monaghan and Leitrim enlisted in the Inniskillings in this town. Many family trees from both sides of the community will find that the seed that brought them here was the barracks and therefore these barracks should be very much a part of community here in Omagh.

"There is no military museum in Omagh and I ask why? The regimental depot for the Inniskillings was here and that history should not be forgotten. Many artefacts are held in homes throughout Tyrone and perhaps the opening of a museum could act as a catalyst to bring that history to life.

"The barracks could be used to show the military history of this former garrison town from 1881 and the connections to the regiments that served in Lisanelly Barracks and indeed the ATS (Auxiliary Territorial Service) the forerunner of the Women’s Royal Army Corps who were stationed in Lisanelly but housed on a site where the Silverbirch Hotel now stands.

"Many soldiers came to Omagh and served in Lisanelly, a research centre with access to military personnel who served here could allow researchers to trace family etc from that time. National servicemen came here with regular battalions long before the ‘Troubles’ and married local women so that connection to Omagh could be explored.

"Further information could be researched on the American personnel that were based in Omagh during WW2 who were based throughout the Omagh area and indeed the historic meeting that supposedly took place in Knock Na Mo between various high ranking officers including General Eisenhower.

"The police museum still appears to be ‘on ice’ and there is no necessity for such a facility to be based in Belfast. The barracks site has plenty of parking and would be an excellent site for such a facility, yet authorities never seem to be able to see beyond the limit of Belfast city.

"When we look at Londonderry, millions of pounds have been spent in investing in the infrastructure of the city. Ebrington Barracks is a prime example of what can be done when the will and the money is made available. £210 million has recently been awarded to ‘Derry and Strabane council as part of the city deal.

"Further development of the Ebrington Barracks site have been announced and I understand control of this specific site rests with the Executive Office.

"Enniskillen in conjunction with South West Regional College were awarded £2.1 million to develop the workhouse site.

"How much have our local politicians brought to Omagh or Strabane? No jobs were transferred to the county town of Tyrone when departments were looking to de-centralise despite us having the potential to develop this site and maintain these beautiful buildings in the public realm.

"We seem to be seen to be in the ‘wilderness’ here. It would remind you of how Donegal was seen by the Dublin government for many years unless they needed the vote of the usually independent Donegal representative.

"West Tyrone needs major investment and clearly we have a majestic site that could house a military museum, a police museum, a local history centre, various government offices, perhaps even musical events organised on the square as the acoustics are excellent there.

"I look forward to the Executive Office, the Department for Infrastructure, Fermanagh and Omagh District Council and the Ministry of Defence working together to ensure the buildings are maintained and not only externally but also internally - perhaps historic buildings and monuments branch will carry out a spot visit and check on the current state of these buildings?"

Alderman Derek Hussey, who sits as an Ulster Unionist Councillor on Derry City and Strabane District Council, speaking in support of his brother Ross's comments added: "The seeming ongoing abandonment of the St Lucia Barrack's site by those who have charge of its upkeep and development can only be described as a gross dereliction of duty by all concerned whether that be the various Stormont Departments or the local Council.

"Though I sit on a neighbouring Council representing the Derg Electoral Area, the Barracks and its environs are of significant historical interest beyond Omagh. Many generally from the wider West Tyrone region and specifically from my own Derg area will also have a fond connection with St Lucia. Some going back over many generations.

"Being aware of the ongoing development of the Ebrington Barrack in Londonderry and the major impact that this is having on the social, economic and cultural landscape of the city, I cannot understand why Fermanagh and Omagh Council fail to appreciate the equivalent opportunity sitting right in their hands within the County Town of Tyrone.

"The Council have been able to develop the use of similar historical buildings and sites in Enniskillen so, let Omagh have the same consideration. I would hasten to add that there is an urgency in this matter as the site continues to deteriorate through neglect."