Get up and dance with Strule Arts Centre 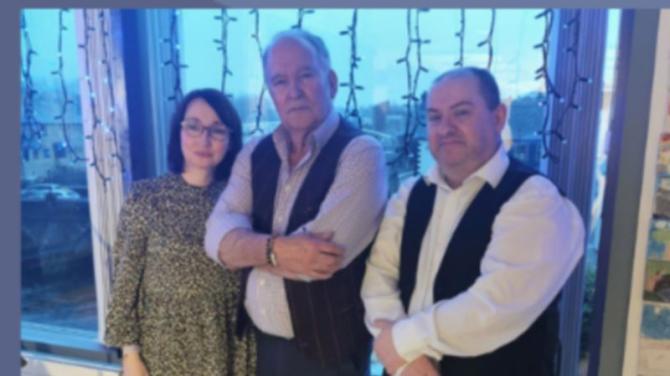 STRULE Arts Centre’s virtual programme continues to provide entertainment so you can stay safe, socialise and get up and dance all at the same time.

"Tune in to Strule Arts Centre Facebook page on Wednesday, April 7, and Thursday, April 8, at 10.30am for some family fun with another Tik Tok craze, “I’m so Excited”. Joanne McCausland from Dance Revelation and Vicky O’Neill from Gobblefunk with a special guest will have you all on your feet making the most of the Easter break," said a spokesperson.

"Not forgetting about the mums and dads who like a good dance, on Thursday, April 8, at 8pm Modern Country Moves will bring a live jive lesson, to get you dancing from the comfort of your own home. Tina McGurgan who has been teaching people how to Jive for years will take to a live stream from Strule Arts Centre Facebook page to get you back into the swing of things, and connect with your friends and family for an evening of dancing and fun.

​"There will be a very special performance on Saturday, April 10, from Omagh’s very own Frank Chism, his daughter Corrina and friend John Kirwan, known as ‘Chism’.

"Whilst Frank is chiefly known for his amazing Elvis show, which was on the road from 1977 to 1995, Frank’s musical experience is varied.

"Beginning with his three-piece group, The Pebbles, Frank was in those days, mainly a guitarist.

"However, his vocal skills soon brought him to the attention of the Royal Showband, who called on Frank to replace Brendan Bowyer when he moved to Las Vegas in 1971.

"He then moved to the Top Seven Showband where he was to rub shoulders with steel guitar legend Basil Hendricks and John Feely, best known these days as a classical guitar tutor and performer.

"After touring the UK and the USA with the Elvis show, in 1995 Frank called time on the act.

"However, he has kept himself busy musically and for the past 12 years, he has returned to his roots, helped in no small way by his good friend, John Kirwan.

"John Kirwan’s first tentative steps into the world of music came in the early '80s when he was lead singer of the rock band Thistle.

"However, many Omagh music devotees will remember him best when he was part of the duo Pubsound with his brother in law Brian Pritchard.

"Also known as Synchro and Split Second, this outfit were together for the best part of 15 years and were amongst the leaders in the pub scene around Tyrone at this time.

"Since going their separate ways, John has been a member of various outfits around Omagh, such as Snowbird, The Hoochie Coochie Band and now a long running partnership with Frank Chism.

"Originally a three-piece band, with Frank’s brother Ronnie on vocals and banjo, Frank and John played briefly as a two-piece before inviting Frank’s daughter Corrina to join, which has helped the band widen their repertoire.

"Corinna Chism was invited to join the band two years ago in order to give an extra dimension to the show.

"However, as with Frank and John, Corrina is an experienced vocalist who enjoys singing various musical styles.

"She has performed both locally and nationally, appearing as a backing vocalist with the Elvis show in such notable venues as the Grand Opera House in Belfast and The Olympia in Dublin.

"Corinna took time off to devote herself to raising her family and working full time.

"Nevertheless, she missed the thrill of singing live and enjoys singing the songs of Mary Black, Allison Krauss and Patsy Cline which have now been incorporated into the act."

Says Frank: "John and I have had the best of times working together over these past few years, working and polishing the set.

"It has been the highlight of my career however, to share the stage with my daughter Corinna and we all hope that everyone watching and listening to the show will enjoy it as much as we have in preparing for it."

Following the success of the first Culture Show, it returns again on Thursday, April 15, at 8pm hosted by the wonderful Gerarda McCann.

Rev Jane and Fr Kevin will discuss the place of the Church in 21st Century Ireland.

Danny McLernon will be sharing his memories of lectures at Queen’s University with the late Seamus Heaney.

Kate Hinds will discuss Sperrin Art Society’s latest Art Exhibition and of course Gerarda will be backed by the Bob Quintet as she swings through some Dusty Springfield, Roberta Flack and the fabulous Aidan McGale will power through Steamroller Blues as part of the second Culture Shows.