£25,000 donation for hospital in honour of Carrickmore father lost to Covid-19 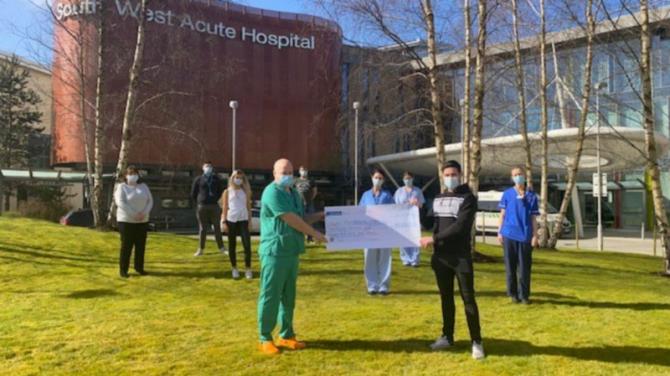 A CARRICKMORE family, who tragically lost their father to Covid-19 at the beginning of the pandemic, have raised over £25,000 to thank the “amazing” nurses who looked after him during his final days.

Declan Grimes (61) sadly passed away in the Critical Care Unit at the South West Acute Hospital, Enniskillen, in April 2020.

Mr Grimes, who was a husband to nurse Sheila and the father of seven, had spent almost a month on a ventilator in intensive care, and his family were unable to be with him during his illness.

To honour his memory family members held a fundraiser in December 2020, initially planning to raise a total of £5,000 by hosting a “Sledgeathon”. This unusual charity effort involved pushing a weight representing a sled a specified distance within 15 minute time slots over 12 hours.

The aim was to push the “sled” the equivalent distance of a full marathon – 26 miles in total. However, so many local people get involved the organisers managed to complete a virtual distance of 105km and raise a hugely impressive total of £25,454.49.

The cheque was presented to staff from the South West Acute Hospital ICU team earlier this month by members of the Grimes family.