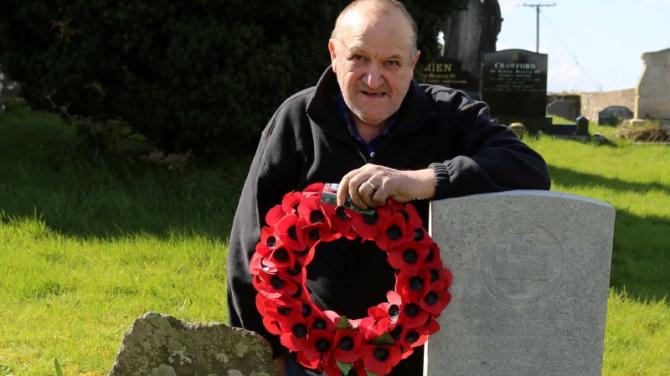 THIS week marks the 80th anniversary of the sad death of Private Samuel McFarland, from Beragh, who was killed at the age of 19.

Mr McFarland, the youngest son of Mr Alexander and Mrs Elizabeth McFarland, died in the Easter Raid of the Belfast Blitz on April 16, 1941.

On the night of April 15 and 16, waves of Heinkel, Dornier and Junkers JU-88 planes attacked Northern Ireland.

Thirteen young soldiers of the 70th Battalion Royal Inniskilling Fusiliers were killed as a result of a Luftwaffe high explosive bomb that struck around 11pm.

Seven teenagers were killed in the atrocity. As a battalion of young soldiers, they were not old enough for oversea service. Their role was the defence of the Newtownards airfield, which was base for RAF 231 Squadron.

As reported by the Tyrone Constitution at the time of his death, "Fusilier Samuel McFarland, son of Mr and Mrs Alexander McFarland, of Clogherney, Beragh, made the supreme sacrifice through enemy action and by kind permission of the Commanding Officer, The Royal Inniskilling Fusiliers, full military honours were accorded at the funeral from his father's residence to the graveyard at Clogherney Parish Church.

This newspaper reported: "The deceased was 19 years of age and joined the army about 12 months earlier. His brother, William, is at present serving in the Inniskillings. Deceased, who was very popular in the Beragh district, leaves his father, mother, three sisters and four brothers to mourn his loss.

"The popularity of the deceased and his family was manifested by the huge concourse which followed the remains to their last resting place.

"In addition to the fund band under Mr HF Ottway, the Royal Inniskillings sent a firing party, pallbearers and buglers, the troops being under the command of RSM Jerram MM. Sergeant Wright was in charge of the firing party.

"Deceased was a member of a young solders battalion and it was appropriate that the firing party and pall-bearers were all young soldiers and they were a particularly smart party.

"In addition to the troops, there was a full turn out of the local Home Guard under Mr R Fenton and 'B' Special Constabulary under Mr W Johnston. Local ARP personnel under Mr A F Clarke and Mr J Gregg also attended.

"The Union Jack draped coffin was borne from the house to the church by members of The Royal Inniskilling Fusiliers and by members of the Beragh Home Guard. The band rendered the 'Dead March in Saul' and Beethoven's Funeral March. The music of the band was delightful and made a solemn occasion very impressive.

"Clogherney Parish Church was filled to capacity and many people found it impossible to gain admission. Owing to the illness of Rev R Dougherty, rector, Captain C M Harris officiated at the church and graveside, where buglers sounded the 'Last Post' and three volleys were fired over the open grave.

"There were many beautiful floral tributes from relatives and friends, and from the Battalion, Royal Inniskilling Fusiliers, to which the deceased belonged."