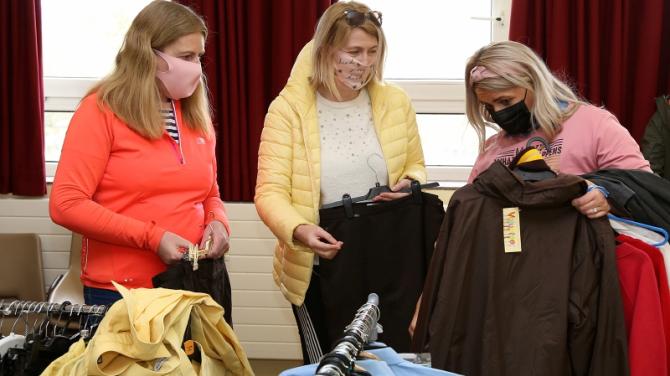 WELL over 1,000 families have now benefitted from the Omagh Uniform Exchange Group scheme since its inception last year.

Last July, a thoughtful group of local volunteers started the scheme as they understood that many families were not in a position financially to buy new uniforms amidst the global pandemic.

In order to help, the group moved into St Joseph's Hall where parents could have a look for items such as shirts, skirts, trousers - and even shoes.

And judging by the significant number of families who have made use of the scheme, it is evident that it was much-needed in the locality.

Sacred Heart College teacher, Cathy McNamee, of the group, explained: "Last summer, we had to close our online forum and just take walk-ins.

"It has come to the point now where we need to look at a stock management system because it has got that big.

"We help families right throughout the community, from Castlederg to Ballygawley. Originally we had thought about just doing secondary schools in Omagh, but then we included primary schools and the reach just got further and further. So we have drawn the line at St Ciaran's, Ballygawley and Castlederg High School.

"The demand has clearly always been there. Uniforms are made to be long-lasting, however, their clientele are not because they're always growing and quickly grow out of them.

"Each individual school always has spare uniform, but there is a stigma attached to that. We wanted to bring it out of the schools and into a neutral venue where people could come in and use it for sustainability and to reduce their carbon footprint. We wanted it to be two-fold. Some of the uniforms we received were brand new and the pupil couldn't wear it anymore because they had grown out of them.

"People are now reflecting on how they're living their life and they're not engaging in a throwing-away culture.

"So we have found that people are reverting to more old fashioned value and are not buying new.

"What we have found is that people have very much invested in the idea of sustainability, but equally so, the financial pressure of the pandemic has really brought home and highlighted the price of uniforms.

"The price of uniforms versus the amount of time they are worn do not compute. Far too much money has been spent on uniforms every year."