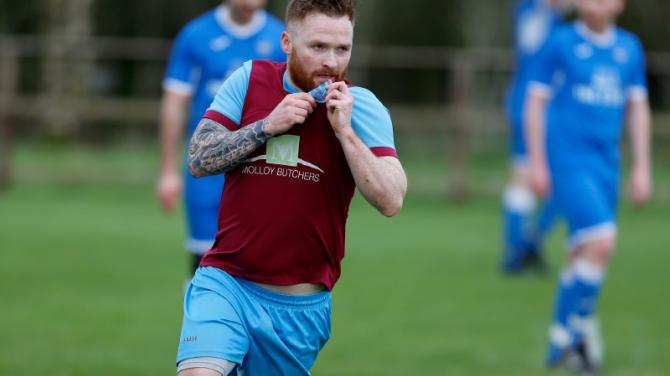 A POPULAR and talented footballer for Tummery Athletic has bravely spoken out about his addiction to gambling in a bid to help other young men who might be in a similar position.

It is over six weeks since Dromore man Aidy McCaffrey placed his last bet - a £150 stake on Manchester United to beat West Ham in the FA Cup, which he lost. After 20 years of - in his words - constant gambling - he finally said enough was enough.

And he believes that, by speaking out and telling his story, other people - who may not even realise they have a problem - may think twice about their gambling habits.

Aidy explained that his addiction, unbeknown to him at the time, began at the tender age of 12.

"I stuck 10p into a machine and got the £5 jackpot first go. As soon as that happened, it has had me hooked ever since.

"From the age of 12 to around 19, I was using only fruit machines and poker machines. I got £20 from my dad every week as pocket money and every penny went on the machines. That was supposed to be my lunch money through the week but I didn't eat, I was just gambling everything.

"I then worked in a wee pub lifting bottles on a Sunday morning and I got £14 for doing it, but as soon as I got paid it was gone within half an hour.

"I always craved for more, but when I was skint that was me beat. I never looked to lend money or anything. Thankfully I knew not to go any deeper."

His gambling habits changed when Aidy got a full-time job.

"I was doing football bets a lot. And the machines in the bookies were even worse as they were £2 a go. I wouldn't think twice about putting £100 in. Within half an hour it was gone. Everything I had went on gambling.

"This wasn't every single week but the majority of them.

"One Friday night, after I had got paid £250, I went into the pub and put every single penny and another £50 of my mate's into the machine just to get the £25 jackpot. That was one of the worst incidents.

"Sometimes I didn't even think about it, I just thought: 'well I'll be getting paid next Friday again'. But I was gutted at other times when I thought that I had worked all week just to do that.

"My last bet was six weeks ago when I put £150 on Manchester United to beat West Ham in the FA Cup and they drew 0-0. That's when I said enough was enough. If I had won that bet, I'd have been thinking how I was going to win more because it's never enough. I would have text the boys in the group saying I wished I had put £300 on it."

Aidy believes that gambling is a real problem for many young men in the community,

"A lot of young men have a problem, even if they don't know it. In my WhatsApp groups, the chat about gambling is never-ending," he said.

The internet and smartphones have made gambling incredibly easy, with punters now required to touch just a couple of buttons on their device to place a bet. For someone in Aidy's position, it is difficult to escape the temptations as every football match is interrupted by advertisements with the latest odds and betting specials.

"I never had an online account because I knew I had a problem, I was always asking my friends to do my bets, but then over Christmas I downloaded an app on my phone and within 12 hours, I had lost £500. I had stayed up to 4.45am and that's when I had lost my final £2. I deleted the app then."

Aidy admits that his temptations will be put to the test when bookmakers and pubs reopen, but with the support of a couple of friends, he is confident he will be able to beat his addiction.

"It's going to be a bit of a test when the pubs reopen because I couldn't have walked past a machine without playing it. As soon as I saw the flashing lights, I just saw: 'come on, play me'.

"If I was out with my friends for a couple of pints, they would all be sitting having the craic and I'd be over at the poker machine.

"Before football I would always go into the bookies and put on a bet. Straight after the football, before I even shower, I'm checking to see how my bet got on. If it loses, then I'm thinking about the late kick-off to see who I could put £50 or £100 on to get my money back.

"One of my good friends lost £1,000 on a roulette machine about seven years ago. Since that day, he has not gambled. So I look up to him now, I'll text him for advice and he's always there. He tells me he's the happiest he's ever been."

Offering advice for anyone who may be worried about their gambling, Aidy said: "Some people may say, 'sure I'm only losing £20 a week but if you gather that up it's £1,000 a year. That's the way I look at it now.

"As a young man, I know it can be hard especially through lockdown - people are bored - but at the end of the day you'll never win. No matter how much you win you'll always give it back to the bookies eventually."

For help and support with gambling, visit www.gamcare.org.uk