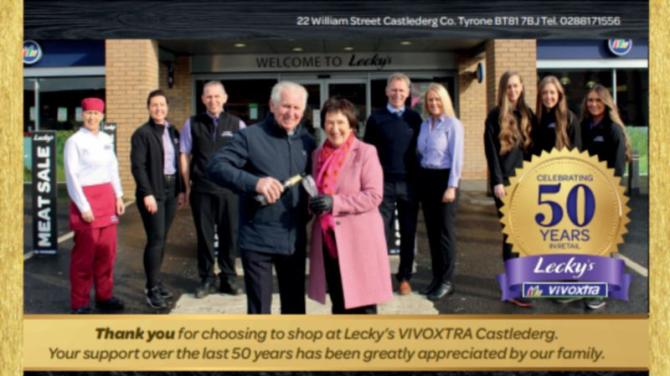 LECKY'S ViVOXTRA in Castlederg are celebrating a special milestone as they mark 50 years of serving the local community.

Victor Lecky opened 'Lecky's Quality Meats' in the Diamond, Castlederg in May 1971. After working as an employee in the butcher shop, an opportunity arose for him to purchase the business. With hard work and the support of his family, Victor established a thriving butchers shop in the heart of Castlederg, his motto has always been: "Quality, Value and Service".

In 1976, Victor and his wife Eileen began their second business venture, opening a VG Foodstore at William Street, Castlederg. It was the first supermarket in the area to incorporate an in-store butchery department which was run by his brothers: Ken, Roy and Trevor. Other valued members of the team included Letty Moore, Margo Sproule, Kay Lecky, Sam Moore and Andrew McSorley.

Mr. Will Harron, who had previously run a VG store in Castlederg, was instrumental in helping set up the new business and continued to be a valued mentor to Victor throughout the years.

In 2004 after acquiring property opposite the VG store, the Lecky Family made a major investment, opening the first ViVOXTRA in Northern Ireland with additional services of instore delicatessen, butchery, bakery, fresh produce and an extended range of household goods. Employing 50 full time/part time employees, with the support of the local community, the business was an instant success.

With hard work, dedication and Victor's motto of "Quality, Value and Service", the team at Lecky's ViVOXTRA have won several retail industry awards, the highlight of which was winning UK Independent Retailer of the Year.

50 years later; Victor, Eileen and the Lecky Family would like to thank the local community and the local suppliers for their continued support. They would also like to acknowledge all staff past and present who have helped on their journey.