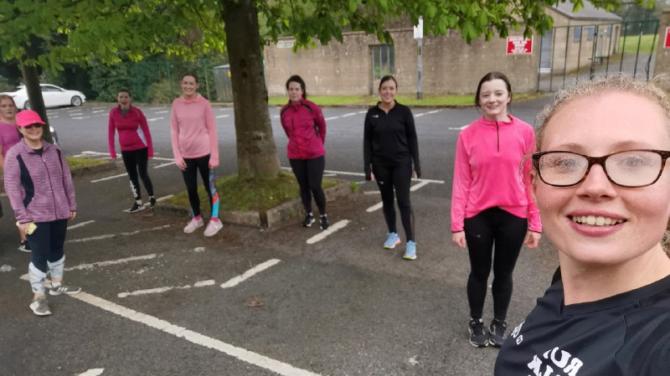 A NEW running club has been formed in Omagh, but rather than focusing on breaking personal bests and fast running times, the group simply wants to make a difference to people's mental health.

After learning about the 'Run Talk Run' running group in London, Alex McKinley had a desire to start a similar programme in Omagh, designed to get local people who may be struggling with their mental health to open up and express their feelings.

"It's a support club and we run 5k every week at the pace of the slowest runner," said Alex.

"All abilities are welcome. Running comes secondary to the chatting. It's an opportunity to talk about your day, whether you want to get deep into conversation or discuss what you're having for your dinner... it's something to help build up a community.

"With people being lonely over lockdown, it is somewhere they can come for a run and a chat.

"The group comes from a girl in London who was having trouble with her mental health and found it much easier to open up while running with other people. It has grown and I think there are three or four other groups in Northern Ireland.

"It's fantastic to have this in Omagh. The mental health services around here are struggling at the moment, so if this is something that can help someone even just a little bit then it's all worthwhile."

The runs take place on a Monday at 6.15pm at the car park at Omagh Leisure Complex, close to the health centre.

"We are capped to 15 runners at the moment so we ask that you sign up through the app 'My Crew'," continued Alex.

"That way I can keep track of the numbers."

This week will be the fourth session the group will have met and Alex believes everyone is enjoying the experience.

"Time flies when you're running," she added.

Alex, who tragically lost her sister Kyra in a road traffic accident, picked up running about six months after her death and has found it really helped her mental health.

"After all of the support we received, it's nice to give something back," she said.

"My sister had a bit of trouble with her mental health - she suffered from anxiety and mild depression - and I know this is something she would have benefited from. It's nice to provide something that would have helped her.

"When Kyra came home from university, she got stuck into the gym and found that it helped. For me, running helped me to cope after her car accident. The whole support of the community really helped too."