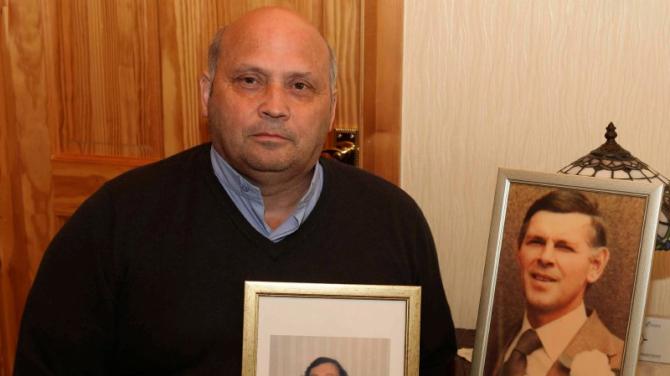 A LOCAL church minister whose father and uncle were both murdered by the IRA has hit out at controversial plans to ban prosecutions for all killings which occurred during 'The Troubles', calling on the government to 'stop pandering to terrorists'.

These plans would apply across the board and would mean that there will be no prosecutions for British Army veterans, IRA members or loyalist paramilitary group members over incidents which occurred prior to the 1998 Belfast Agreement.

Rev Alan Irwin, from Sixmilecross, who is the rector of Colaghty Church of Ireland in Lack, lost his father Thomas in 1986, and uncle Frederick in 1979. No one has ever been prosecuted for either murder.

"That would mean that my father or uncle would never have anyone brought to justice for their crime," he said.

"I think it's scandalous that Her Majesty's government would want to draw comparisons between the terrorists - those who murdered members of the security forces - and innocents throughout The Troubles.

"It is unbelievable that they would do such a thing.

"Anyone who has conducted a criminal act and is found guilty should then face the courts, if there is evidence there.

"What annoys me is that successive governments have not listened to anything we as victims have said. A large chunk of the Stormont House Agreement has no support whatsoever within the victims' sector - we have made that very clear but no one seems to listen.

"I am sad that this government has stooped so low at this point in time. I think the government has to move away from this - there have to be other measures. Stop pandering to the terrorists. Stand up for the innocent, who want justice.

"I also feel it's hypocritical of Sinn Fein leadership coming out in opposition to this, claiming soldiers are 'going to get off lightly'. They haven't mentioned the terrorists that they stand up and glorify.

"It has been heart-rendering that I have written so many anniversaries during lockdown for people who have lost their loved ones and the majority, if not all of them, have never had justice. All they want is justice, and it's not going to come if we keep pandering to terrorists."

The spokesman for the South East Fermanagh Foundation (SEFF), Kenny Donaldson, said: "The UK Government needs to come forward with their proposal on how they will set about delivering on our needs and demands;

"1. The upholding of the rule of law and its' consistent application - no-one should be beyond the reaches of the law. No Peace Process can have value with such a manipulation of natural justice.

"2. An Acknowledgement piece across the board around the illegitimacy and wrong of criminal violence.

"3. Strengthened glorification of terror legislation and the directive that it be applied, and prosecution follow for those deemed to have breached that law.

"The floury language needs to end, and we need definitive outcomes.

"Where a member of the security forces has faced due process and has been deemed to have no further caser to answer then there should be no further persecution of such individuals.

"Credible and new evidence must be provided otherwise they should not be pursued by the criminal justice process nor the civil litigation process which swallows up vast sums of money from the public purse, benefiting a number of law firms and those intent on rewriting the narrative of 'the Troubles."