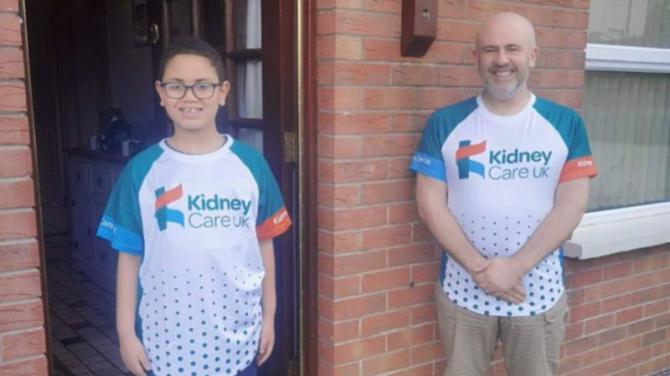 THE former chief inspector of Fermanagh and Omagh, Graham Dodds, has been hailed a 'hero' by the nine-year-old schoolboy who received his kidney in a remarkable act of generosity.

Mr Dodds underwent successful surgery on Tuesday of last week to donate his organ in a bid to save the life of Joshua Dolan from Enniskillen after coming across an urgent appeal from his family.

Just over a week later, Mr Dodds has "absolutely no regrets" and admits seeing the rapid improvement in Joshua has made it all worthwhile.

In a kindhearted thank-you letter to the Omagh man, Joshua wrote: "To my hero Graham. Thank you for my special police gifts, they really mean a lot. But most importantly, thank you for being my kidney donor so I can have my life back to normal soon."

Mr Dodds is now fully focused on his recovery.

"Surgery went really well and I was able to discharge myself 24 hours later," he explained.

"Normally you would stay in for three or four days, but I was feeling really good and didn't want to be on a burden on the hospital, taking up a bed or the staff's time as they are so busy at the moment.

"I was happy to discharge myself and the staff were content for me to do so. I was released with pain relief and was able to treat myself from home. I'm recovering and the wounds are healing well. It was very sore but I'm gradually getting mobility back. I find myself very tired at points, I could sleep for hours, but it's a system reset as I went in feeling very well but came out feeling really weak. Joshua, on the other hand, went in as a sick person but every day he's feeling much better because he's now got a really good kidney. The surgeon actually called it a 'whopper of a kidney'!

"Ironically, Joshua is in a better position than me because he was at his lowest ebb."

The next number of weeks will be a challenge for Mr Dodds, who has been advised not to "lift anything heavier than a kettle".

"I'm not allowed to drive for two months and the recovery will be a minimum of 12 weeks," he continued.

But the fact that the surgery has been a huge story of success for Joshua so far is keeping Mr Dodds' spirits up.

"The operation was about four hours long, but I'm feeling very positive because Joshua's kidney stats are all on the increase," he added.

"He can now eat the food he has never been able to before. He doesn't need dialysis and every day he is getting better. It is hoped he can get out of hospital in a week or so.

"So all of my pain has been wiped out when you see the difference it has made to Joshua's life already."

That feeling of improving and potentially saving someone's life is the reason why Mr Dodds is encouraging others to join the donor list.

"I was certain about my decision before surgery and now that level of certainty just increased once I saw how much joy it has brought to Joshua and his family," he said.

"His prognosis was terrible before but now it's good all-round and it has all been worthwhile. Within three months, I'm fairly confident that I will be back to normal. The system is faultless and I couldn't praise the NHS enough. After all they have gone through, everything was done to the highest standard.

"I would encourage everyone to do it. And although, yes, it's a risky operation, the difference it will make to Joshua's life will be incredible. If you are fit and in a position to do it, I would encourage you to at least get tested. I would challenge those myths that you don't need to be related to the person. You don't need to have the same blood type. You don't even have to know the person.

"The difference you can make to someone else's life is massive, and the mental health benefits I've got are so, so important, as I can see the evidence of how it has helped Joshua.

"I'm in a position that I'm physically healthy and my family and work supported me, and I know not everyone is in the position to do it, and that's why I'm fortunate.

"It literally is life-saving. By doing this, you save someone's life. So I would ask everyone to at least consider it."

Mr Dodds hopes he can meet with Joshua in the next few weeks, but in the meantime he is speaking with the schoolboy and his mum twice a day.

"I'm getting regular updates and he's continually improving. That feeling for me is just priceless."

Joshua continues to receive care in hospital but thanks to the generosity of Mr Dodds, he can now look forward to the future.

If you would like to find out more information about becoming an organ donor, please visit www.organdonation.nhs.uk