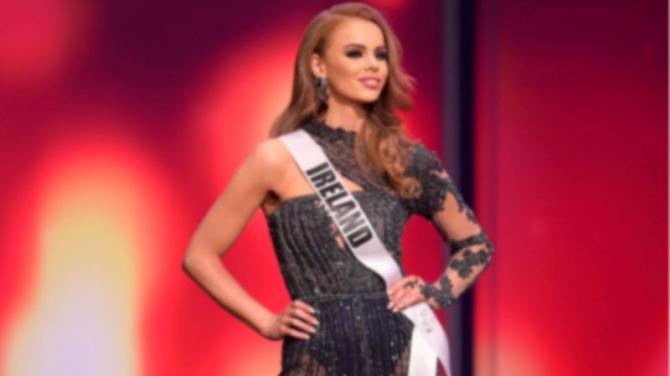 OMAGH's own Nadia Sayers has said participating in the 69th Miss Universe competition in Miami, Florida was "a whirlwind that still hasn't sunk in."

Nadia, 26, represented Ireland in the prestigious competition, where she went up against 73 other inspirational women in the race for the title.

And while Mexico's Andrea Meza eventually took home the crown, it's safe to say Nadia, who holds the title of Miss Universe Ireland, stole the show with an iconic moment that eventually reached a viral audience!

While on stage, the Omagh native was stood behind host Mario Lopez, obscuring her from view.

Not letting an opportunity to present herself to a global audience pass by, Nadia took a side step away from Mario and smiled at the camera.

The clip has since went viral, attracting millions of views across the globe, and praise from countless supporters.

"It was definitely a spur of the moment thing," Nadia said. "Whenever you consider the amount of work you put in to get to Miss Universe, you make sure you are seen whenever you are there!

"The response to the clip was a surprise to all of us. Apparently, every year there are one or two contestants who get a lot of media attention, and this year, it looks like it was me!"

For the piece, Nadia's hair was pulled into a Celtic plait, and she sported large fairy wings.

"I was really excited to wear the National Costume," she explained. "I grew up hearing about fairies at the bottom of the garden, and how if you respect fairies they look after you and give you good luck.

"It was hand-made and hand-painted. It was a real pleasure to get to wear it."

Nadia continued: "I am immensely proud to have competed, and it still hasn't full sunk in.

"It has always been a dream of mine to be on the Miss Universe stage, and it has been on my radar ever since Joanna Cooper, from Derry, was crowned Miss Universe Ireland in 2015.

"I was always in awe of it, and of course, I was always mindful at rehearsals or events to take 30 seconds to look around me and think 'I am actually here!'

"I would think, 'against all odds, with Covid, personal stuff, and stiff competition, here I am - I one of those girls I used to watch!'

"It still hasn't fully sunk in yet, and I don't know if it ever will! It was a phenomenal experience and a whirlwind four weeks that I will never forget."

Nadia, who by day is a youth development officer for Hope4life, hopes her experience will provide inspiration to young girls from across the globe.

As Miss Universe Ireland, she has devoted her time to promoting positive mental health during the pandemic, and as a topic that is close to her heart, she aims to use her influence from Miss Universe to further her aims, which she spoke about during the recent competition.

"I have a big goal in relation to promoting positive mental health in young people, and I am constantly chipping away at it.

"I was one of four girls to be featured on the Miss Universe telecast, where I spoke about mental health and cyber bulling. To represent Ireland on such a leading platform is amazing.

"I have received a lot of lovely messages from girls and mothers from across the world, and interestingly, a lot of young girls with red hair. It surprised me how much that stood out, as I am first Miss Universe Ireland with red hair.

"As any young girl knows, having red hair is like Marmite - people either love it, or you can get bullied for it. I hope that young girls with red hair, and young girls in general, saw that someone on that stage cared and wanted to make a difference."

Nadia said her passion for helping young girls who are struggling with mental health issues stems from her own experiences growing up, where she fought with shyness, confidence issues and negative self talk, missing out on opportunities as a result.

However, having worked hard to overcome her issues, she is now living life to the fullest, and it is this message she wishes to convey to her legions of supporters.

"If you speak to any teacher at Omagh County Primary School, if they even remember me because I was that quiet, they would say I was always very shy," Nadia said. "When I was younger, I had severe body image issues and bad negative self talk, and if you ask anyone who knew me, I hated a lot of aspects about myself for a long time.

"I struggled with accepting them never mind loving them. I hit the level of not being able to be Independent, and not being able to do anything because my mind was against me every step of the way. I was so reliant on other people, and so unsure of my emotions that I didn't have solid footing on anything, and I missed experiences as a result.

"I had to decide that I didn't want to waste any more time because I was not looking after myself. I am glad to say I got that help and am seizing every opportunity.

"Even though I still get really nervous, I push myself into the situation because I know I will be able to deal with it when I am in it.

"Even going to airport to fly to Miami for Miss Universe, I was so scared. This was so much bigger than I had ever anticipated, and having lived in a country that was in lockdown for the guts of a year, there I was flying half way across the globe to compete against 73 other girls.

"I was scared, but I have missed so many experiences because I didn't look after myself. I was standing in my own way, and I didn't want to look back and regret this.

"This mindset takes practice and it becomes easier. Your brain's a muscle, and the more you push yourself into new opportunities and get used to that feeling of fear, the stronger it will become. The payoff and reward is totally worth it."

Having returned to her home in Belfast, Nadia has had time to reflect on the whirlwind experience, and consider the next steps for her promising career.

"I am now in a middle ground, and have so many options sitting there that I never thought would be open. I still have my job Hope4life, which I love. I am not willing to give that up as I am so passionate about it. Not everyone can say they can go to work everyday and love their job.

"I am also looking into taking on bigger modeling jobs, and there is a lot of interest in me working with photographers globally.

"I am also looking into hosting and presenting, as this could be something I go down. I am just following down a path I enjoy and seeing what comes of it!"