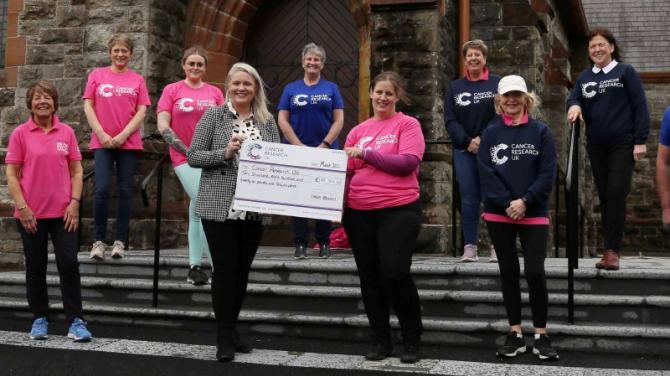 WALKERS from Omagh have raised over £10,000 for Cancer Research after taking part in the 'Walking All Over Cancer' event earlier this year.

Emma-Jayne Fowler was one of the organisers and she has explained how she got involved in the challenge which saw participants walking 10,000 steps every day through the month of March.

She was working from home and on top of that, she and her husband ended up testing positive with Covid-19 and had to isolate.

"January is always usually a long month after Christmas but this year with the cold weather, lockdown, Covid and isolation it felt even worst," said Emma-Jayne.

"I decided to lift my mood and to be able to look to the future and better times I needed to have a focus.

"I happened to see an advert for the Walk all over Cancer for Cancer Research UK on Facebook. Cancer Research is a charity close to our family and I have done fundraising for them before.

"I mentioned it to my mum as she is on the Omagh branch Cancer Research Committee, next thing I know I am added into the committee WhatsApp group and lots of the other members thought it was a great idea and either wanted to join up to walk or to help raise money.

"It took off from there, some other friends and family of the Omagh group members also signed up. We were able to set up individual online fundraising pages which were then able to link them all together to give our total. We were able to gather donations online as well as from cash donations.

"Everyone was so generous, and it was a privilege to be part of a group raising money for such a worthy cause. We had raised a lot of money before March had even begun. We know of other people in the Omagh area who were also taking part, so it is amazing to think that we raised such an amazing amount of money.

"So many of us have either personally, or had family, friends and colleagues who have been affected by cancer and we are delighted to have been able to play our part in raising vital funds for life-saving research. This has never been more important than now as Cancer Research UK have been badly affected by Covid-19.

"In the month of March, we all stepped it out, we completed our 10,000 steps each day no matter what the weather was. It was great motivation with the group posting either in WhatsApp group or on Facebook and friends leaving comments to keep us going.

“Cancer survival has doubled since the early 1970s and Cancer Research UK’s work has been at the heart of that progress – but every step our doctors, nurses and scientists take relies on donations from the public and the tireless fundraising of our supporters.”

"When you donate to Cancer Research you help scientists get closer to finding a cure. Giving as little as £2 a month could fund something as big as a new research centre or as small as glass slides to analyse cancer cells."