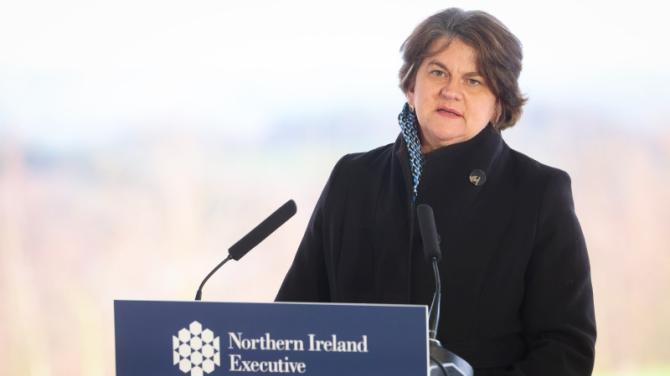 THE DUP are set to lose 'tens of thousands' of voters according to the former chairman of the party's Fermanagh and South Tyrone Association as the fallout over the ousting of Arlene Foster continues.

Hitting out at those who ousted the First Minister, Mr Bell said: “The problem was with those number of MLAs and MPs that decided to go behind our back, to sign letters of confidence, not even give her the chance to see the letter.

“That is where the problem is. It’s not the process of electing a new leader. It’s the fact that we’ve got 28 elected members in the Assembly and Westminster who would actually create a coup and publicly assassinate our leader.

“We cannot go round the doors, the people in Fermanagh and South Tyrone will vote for anyone but the DUP. That is because, not of an election, that is because of what took place before the election.”

Mr Poots has since said he had had a good conversation with Mr Bell.

Asked whether Mr Bell had changed his mind and decided to stay with the party, Mr Poots said: “That is entirely up to him.

“Sometimes people do things in haste but I had a good conversation with him this morning and I would love for him to stay in the party.

“He has made a good contribution over 20 years in the party.”

Also last week, the DUP members in Mrs Foster's constituency voiced their “disgust” at her ousting as leader.

The party's Fermanagh and South Tyrone association said on Wednesday it was standing firm behind Mrs Foster, adding: “This was not done in our name."

“Fermanagh and South Tyrone DUP Association met this week to voice their disgust at the manner in which our party leader, First Minister and local MLA RT Hon Arlene Foster has been treated over recent weeks,” it said.

“Arlene has worked tirelessly over the years not just for Fermanagh and South Tyrone but right across Northern Ireland — helping all constituencies.

“Our Association is sending out a strong message to Arlene Foster. This was not done in our name.

“The Fermanagh and South Tyrone DUP association have unanimously backed Arlene Foster to remain as our MLA, however we recognise this is a personal decision.

“We appreciate that Arlene has sacrificed so much personally over the years for public service, but this Association will stand firm by her side.”

Earlier, Mrs Dodds, appearing at the launch of the 10X skills strategy in Belfast, was asked if the party's image had been damaged by the nature of Mrs Foster's removal.

"I think that we will secure the Union by securing the largest number of pro-Union voters, who will be at our side and who will vote for us.

“So, division is sad, and I think that the party needs a little bit of time to heal itself and get on with the job, which is, for the Economy Department, of making Northern Ireland an amazing place to live, to work, to do business.”

On Friday the leader of the Ulster Unionist Party Doug Beattie said a number of disaffected DUP councillors and members were “having conversations” with his party.

However, he warned that any new members must share the party’s vision and values.

“I’ll not take anyone on board just as a home because they are disgruntled with the DUP,” he said.

Mr Poots added: “I am reaching out the hand to others who maybe aren’t happy about the result of the contest, but there was a contest, it was fair, the outcome is clear, I have a task to do and I will do that task.”