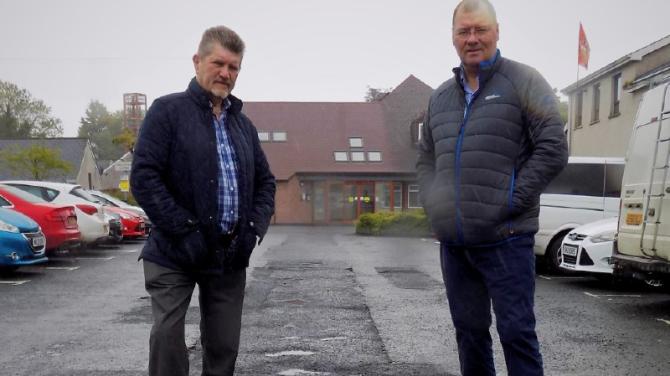 LOCAL Ulster Unionist Councillor, Derek Hussey, has hit out at the "unacceptable" condition of the main car park in Castlederg and has urged the relevant department to take responsibility for its ongoing deterioration.

Referencing the poor state of 'Albert Street' car park, Castlederg, Alderman Derek Hussey feels the issue has "fallen between two stools", with neither the Department of Infrastructure, or Derry City and Strabane District Council, so far willing to commit to much needed repairs.

This busy car park is in daily use accommodating traffic to the nearby Doctor's Surgery, a Chemist Shop, Bridgetown Orange Hall and several small business premises around its perimeter together with normal parking for those shopping or working around town. Mr Hussey feels repairs must be made a priority given clear Health and Safety issues due to its location.

However, the councillor said that confusion has been caused following the decision several years ago to transfer maintenance responsibility for car parks from the DfI Road Service to the Derry City and Strabane District Council.

Alderman Hussey who represents the Derg area said: "The issue of the unacceptable state of the road surface from the McCay Court Car Park entry to its exit at the Surgery, Lower Strabane Road has been raised at various levels and continues to 'fall between two stools'.

"Several years ago, car parks were transferred from DfI Road Service to councils. There continues to be confusion as to ownership of this stretch of roadway though I maintain that it is council's responsibility and that council should deal with an issue that continues to deteriorate.

"A reply from the Minister for Infrastructure, Nichola Mallon, would now suggest either that DfI are accepting responsibility, or they have not investigated the location of concern which does not surprise me. I have now made contact again with both parties and hope that they can now get it sorted between them."

In conclusion Alderman Hussey added: "I thank the council's Business and Culture Director, Stephen Gillespie, for agreeing to meet with me on-site and welcome his appreciation of the concerns of electors that have now been relayed to him and clearly seen."

A spokesperson for Derry City and Strabane District Council said that council is aware of the issues in this and a number of our other car parks stating, "Officers are currently compiling a report that will group the works required into a schedule of minor works and more major maintenance works for car parks across the council.

"It is expected that a report will come before members of the Business and Culture Committee for consideration in the very near future."

When contacted, Department of Infrastructure outlined that provisional list of resurfacing schemes in Derry & Strabane District Council area is being developed for delivery during the 2021-22 financial year, subject to financial decisions.

A DfI spokespersons said: “Minister Mallon made several bids to the Executive for additional money for roads. This included a bid for £11m in June which was not met.

“Looking ahead to 2021-22, as part of the Budget information gathering exercises, the Minister included a requirement of £120m for Capital Structural Maintenance. The Minister has indicated she remains committed to retaining the rural roads fund to help address those rural roads in most need. The limited service is being applied equitably across the entire road network.

“In the interim the Department will continue to regularly inspect all public roads. Any defects identified that meet the requirements of the limited service for repair shall be addressed.

“Minister Mallon continues to press for additional funding for her department to support the delivery of key services for citizens right across the North.”