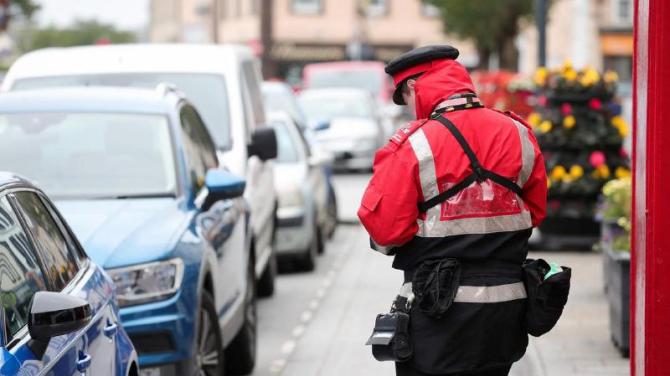 HUNDREDS of parking fines have been handed out locally during the pandemic despite enforcement having been significantly scaled back.

Despite severe restrictions for the last year however, figures show that parking attendants have still been busy issuing tickets to motorists who run foul of the rules.

Statistics show that from March 2020 to the end of January 2021, over 2,400 penalty charge notices (PCNs) were dished out to motorists in Omagh.

This is also despite the fact traffic wardens were stood down for a period between April and June last year.

And, in response to the latest COVID-19 lockdown, parking enforcement was also scaled back in line with road usage from the end of January 2021.

A small team of Traffic Attendants (TAs) were retained to be deployed to those locations where they could contribute most to road safety and traffic progression.

During that nine month period, a total of 1,194 on-street PCNs were handed out by traffic wardens - or ‘red coats’ as they are colloquially known - to motorists in Omagh town.

Elsewhere, fifty three fines were issued in Irvinestown, 13 in Castlederg, 13 in Fivemiletown and six in Fintona, during this period.

None were issued in Aughnacloy, Clogher, Dromore, Kesh and Newtownstewart.

In terms of off-street parking in council-owned car parks, a total of 1,227 fines were issued in Omagh to motorists who had breached parking regulations.

In neighbouring Enniskillen, there were 1,122 fines slapped on windscreens.

A Freedom of Information request to the department also revealed that across Northern Ireland, 45,786 on-street parking fines and 15,092 off-street fines were issued during the same nine month period.

Fears have been previously expressed that excessive ticketing in town centres is driving shoppers towards large out-of-town retail parks and supermarkets.

DfI says parking enforcement aims to reduce the number of illegally parked cars, reduce congestion and improve road safety, and as such, PCNs are necessary.

Confirming the resumption of full enforcement, DfI Minister Nichola Mallon admitted it was not a popular decision, but a necessary one as town centres recover post-COVID.

"It is important for economic recovery that we all support local businesses at this time and as Minister for Infrastructure I want to ensure that vehicles are parked safely and considerately, and that there is a turnover of parking spaces in our town and city centres," she said.

"I know that this may not be popular for some, but I have carefully considered the needs of all those using our roads before making my decision.

“As businesses reopen, I would urge vehicle users to park responsibly at all times and to think about the impact you may have on others.

"In particular I would want to discourage pavement parking as this can cause issues for pram and pushchair users, and impacts on the mobility of disabled and older people.

"I would also encourage anyone travelling to our towns and cities to make their journey by sustainable modes of transport, where possible."

She added: "Enforcement is necessary as it assists with safe parking management and I would want to remind people of the important role that Traffic Attendants and others continue to play in this respect.

"I ask everyone to support and co-operate with them in their daily job and in doing so you will make travelling and parking much easier for all road-users.

“I want to thank the public for their support during this difficult time and ask that we all continue to follow the advice, and work together and responsibly to get through the challenges of COVID-19 as we look towards recovery.”