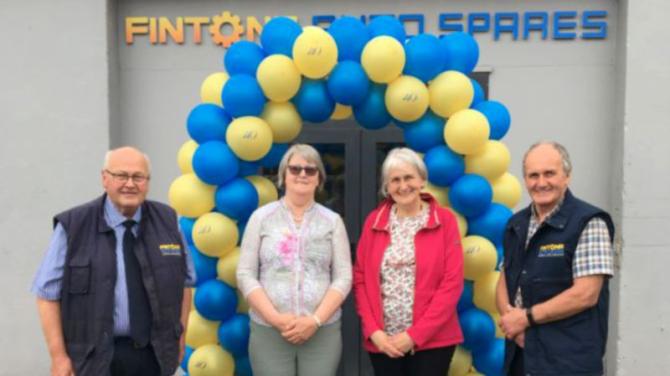 A well-known local business which specialises in auto spares, fuel sales, tyre and car servicing, located in the heart of Fintona town is now celebrating its 40th year of business.

First established in May 1981, Fintona Auto Spares has continually expanded over the years to offer an extensive range of both products and services, while keeping a friendly, family-centred approach at its core.

One year later, Jim's brother, Charlie, permanently joined the business, which had then progressed to selling new parts for Opel and Vauxhall in 1983.

In October 1985, Fintona Auto Spares relocated to 43 Mill Street, with the addition of a large yard and MEX Petrol station. It is now one of the oldest Maxol service stations in Northern Ireland. In the same year, Charlie's wife and current business partner, Marion, joined as a book keeper.

Additionally, in the late 1990s and early 2000s the ever-evolving business moved from catalogues onto a computerised system for selling parts online. The addition of Charlie and Marion's son, Lee, in 2001 led to online selling. Lee would go on to become current General Manager.

In 2010, Fintona Auto Spares started selling solid fuel and tyres, and in 2011 the business became a fully licensed car dismantler.

Significantly, 2012 brought big changes with a computerised accounting system, and in May 2015, new pumps were installed, making it the first 24-hour filling station in Fintona.

The parts store was revamped in 2018, with parts now being supplied for all makes of vehicles whereas the business before had focused solely on Vauxhall/Opel parts alone.

Lastly, in 2020 the addition of an 'Ad Blue' pump was installed within the premises, as well as servicing offered for all types of vehicles.

Notably, 40 years in business is a significant achievement for any business, and does not happen without consistent hard work, continual business evolvement and support from loyal customers. Jim, Charlie and Lee along with all the staff at Fintona Auto Spares would like to take this opportunity to thank all of their valued customers for their sustained support throughout the years.