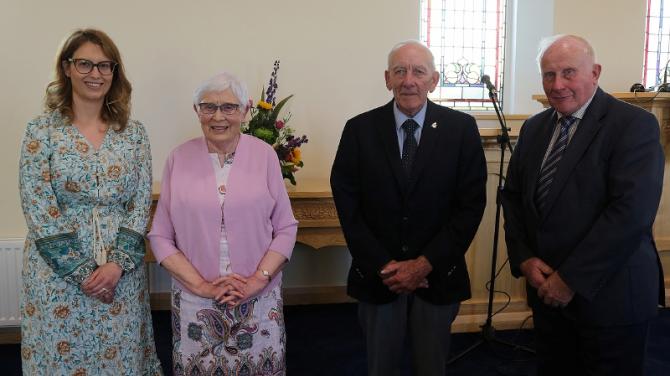 A NEW publication recording the history of Killeter Presbyterian Church was launched at a special ceremony in the church on Wednesday, June 23.

The book of almost 200 pages and supported with various photograph charts the most westerly outpost of the Blue Banner in County Tyrone.

The congregation which was founded in 1798, with a small building with a thatched roof, clay floor and seats of turf sods. The little church built on a well chosen elevated site in the townland of Maghernageeragh (The plain of the sheep), and it has for over two centuries provided a spiritual home and Christian witness to the people of this district.

It was not until 1791 that Rev James Henderson was ordained in First Castlederg. He also had charge of Killeter and Pettigo and he preached in Killeter every third Sunday. He died in a drowning accident as he was riding across a river in flood in 1818.

Rev James Adams, a native of Stewartstown was ordained in 1820 and died in 1837. He also preached every third Sunday. It was during his ministry in 1827 that the congregation became a separate entity.

Due to ill health in 1830 Rev Adams was unable to conduct services and the pulpit was occupied by Rev James Dill minister of Dromore. Describing the church, he said: "I remember supplying the pulpit of Killeter, the church was a large one, double aisled, but it and the congregation were equally dilapidated, the floor which was earthen was so uneven that it was as much as I could do to keep my feet.

"The pews were all so shaky that when one moved they all moved, the pulpit was alike. I gave out the 100th Psalm, long metre, the precentor commenced to sing it in common metre tune, but before he came to the end of the first line, stopped and called out "I've lost the tune." His singing is something I shall never forget, most unnatural and unearthly, a kind of screech."

The Great War also took its toll when two of its members were killed Corporal Thomas J McCormick serving with the North Irish Horse in 1918 and Pte Gilbert Young, serving with the Canadians also in 1918.

During the more recent conflict three members of the congregation were murdered by terrorists while serving in the security forces, William Bogle, UDR, Gregory Elliott, UDR, William Monteith UDR and RUCR and Civilian Ian Sproule.

The book also highlights the records of education at the nearby Maghernageeragh school which closed in 1945 and other local schools. Research took the editors to Australia, United States of America, Battlefields of World War 1.

Many soirees, summer fetes, socials, picnics, special events and services the annual excursion to Bundoran and Portrush are all documented in its pages.