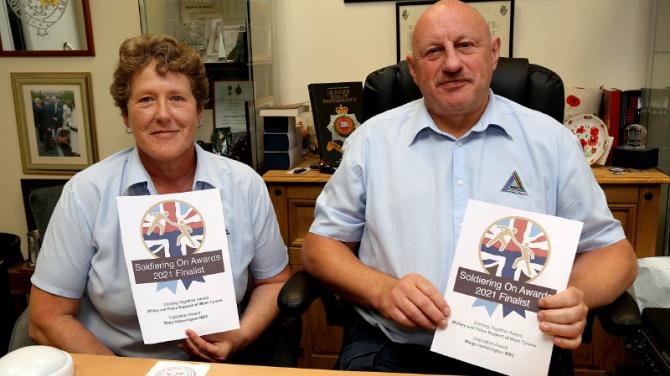 The finalists have been chosen from a record-breaking 275 individuals, partnerships, and organisations nominated in the 'Soldiering On Awards', which is an opportunity to recognise some of the heroic work that goes on in the sector.

MAPS was formed in 2011 as an ex-services charity run by those who themselves served their community during the time, commonly known as ‘The Troubles’ under Operation Banner.

The charity looks after the welfare, support and sign-posting needs of former colleagues.

The winner is chosen through a public vote and this year the voting window for the Inspiration Award will be open from 9 to 22 August.

Richard Scott, founder of MAPS, said the charity is "tremendously excited" to have made it into the final of two categories in the awards.

"First of all, we are tremedously excited that we have made it through in the two categories of the 'Soldiering On Awards'," he said. "There are 38 finalists in total, and for us to make two of those is both significant and very humbling.

"The best message for us is that even a short time after being nominated, we have seen an increase in the numbers of people contacting us. That is one of the best aspects of awards like this - it raises our profile, and boosts the message that we are trying to get out.

"We have an awful lot of veterans both in the military, police and prison service who have been forgotten. It is important for them to know that there are organisations here to remember them, remember the sacrifices they have made, and to give them back a voice. We want to encourage them to come forward for help.

"Overall, we are tremendously excited, and are eagerly awaiting the results."

“Whatever your connection to the armed forces, we as a nation salute your extraordinary achievements and express our profound gratitude for everything you do for the people who keep us safe and secure.

“And it is for all that, and more, that I am proud to salute the Soldiering on Awards and thank Ren Kapur and her team for creating a process which showcases the talent and abilities of all of you who make up the armed forces community. As we know, the United Kingdom is the best place to be a veteran anywhere in the world."