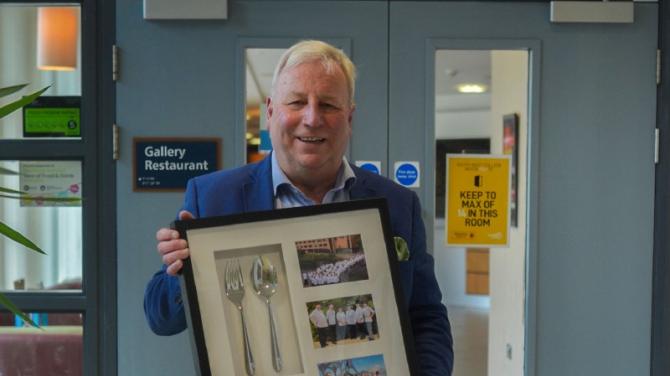 AFTER 22 years of teaching hospitality and catering in South West College, formerly Omagh College, Peter Waterson has decided to retire.

Peter, who was born on the High Street of Omagh, is the son of Elaine and the late Dai Waterson, formerly of the Royal Arms Hotel.

Peter attended Omagh Academy Prep School before going to Coleraine Academical Institution (CAI) as a boarder for seven years. On leaving CAI, he went to the College of Business Studies, Belfast, where he studied for four years for the Institute of Hospitality qualification.

During this time studying, he had two periods of work experience - the first of those being in the Everglades Hotel Londonderry under the supervision of the then-general manager, the late Mr John Herlihy, who he held in high esteem.

John went on to own and run the Portaferry Hotel with his wife Marie.

His second work placement was a trainee managerial role under the supervision of the late Mrs Foster, catering manager at the Ulster Hospital, Dundonald, meanwhile working in the family business at weekends and during holidays.

On completing his studies, he returned to join his late brother Robert and his wife Elaine (junior) along with his parents in the family businesses, the former Royal Arms Hotel Omagh and Inn on the Park Hotel, Dungannon, in the early '80s.

Following his wedding to Gail, nee McCormick, another graduate of hospitality at the University of Ulster Jordanstown, the Waterson team of hospitality professionals was strengthened further.

Peter’s late brother Christopher also worked in the family business for a time, but left to start up business in Glasgow, returning some years later to take ownership of the Central Bar Portrush which he renamed ‘Watersons’.

Peter worked in the family business until the sale of the Royal Arms Hotel for town centre development in March 1999.

In December of 1999, Peter took up a lecturing post in the school of hospitality and catering in the now South West College.

Having had a particular interest in the development of staff, it was always likely that he would end up working there because of the close association between the Waterson family and the college for so many years.

Peter reflects on his successful years in business being attributed to the fact that many loyal members of staff were former students of the College and indeed many school leavers taking up employment in the Royal Arms Hotel were supported by the family to take up day release courses to extend their education and skills.

He remembers one former employee from Killyclogher who started in the wash up and went to College to study catering and progressed to the College of Business studies.

She returned to the Royal Arms Hotel taking up the position as restaurant manager before taking up a position on the QE2.

She was one of many the Royal Arms and South West College graduates who won numerous high profile awards across service, front office and culinary skills.

Two former college students, both of whom worked part-time in the Royal Arms Hotel, took part in the world famous ‘Salon Culinaire’ at the International Hotel and Catering competition in Olympia, London, and their travel costs were sponsored by the Waterson family.

One of these students went on to become a head chef in Switzerland and Peter has fond memories of his visits when he returned to holiday with his family. The benefits of competitive work was something Peter strongly promoted and encouraged during his time teaching in South West College and under his tutelage the students achieved many accolades in culinary and service excellence.

The Waterson family were actively involved in the development of hospitality and catering in Northern Ireland and Peter's father Dai was the chairman of the Northern Ireland Hotels Federation in 1986-87 and Peter himself was a council member for many years.

Peter stated it was always his proudest moment to meet young people who had initially been uncertain about their careers finding sustainable and successful employment in the hospitality industry which he loves so much.

His strong and effective networking within the industry locally and regionally helped Peter enrich the student curriculum in arranging employment opportunities, industrial visits and dining experiences.

“The quality of training in the college by the skilled and supportive teaching team and the excellent facilities in the kitchens and restaurant has given many young people the ‘work ready’ employability skills needed for successful careers in this industry – this is all we wanted for our students," he said.

Michael McAlister, chief executive of South West College, commented: “For many years the Waterson family have been the trailblazers of Business engagement with local FE colleges.

"The family took an active and valued part in shaping curriculum and developing real workplace skills in the hospitality and tourism sector in Northern Ireland and we were fortunate to work alongside such well-respected industry professionals.

"Peter has been an important part of our teaching team for many years and his commitment and contribution to his students has undoubtedly led to many successful careers in our local hotels and restaurants and much further afield.

"His kindness and generosity will be greatly missed by his students, colleagues, customers, and friends in South West College and we wish him a very long and happy retirement."

After some 40 years of working and teaching in the hospitality industry, Peter has decided to step back and take more interest in the family farm.

He has always followed his passion for rugby and all equestrian sports and recently his wife Gail, daughter Georgia and himself took up golf so he says he looks forward to having time with his family and Georgia’s boyfriend Fraser who is a very good golfer and is good for advice on what swing is good or not so good as the case may be!

Peter’s only regret is leaving behind many good friends and a very strong and highly motivated catering team, he wishes them well in the future and looks forward to returning to the college as a paying customer in the training restaurant.

"I was overwhelmed by the presentation of gifts to me on the occasion of my retirement by management and colleagues via a virtual coffee morning from all three campuses due to Covid -19 restrictions. Gifts and reflections which I will feast upon for the rest of my life."