Hairdresser and Tyrone native (91) has 'no plans to retire' after 65 years in salon! 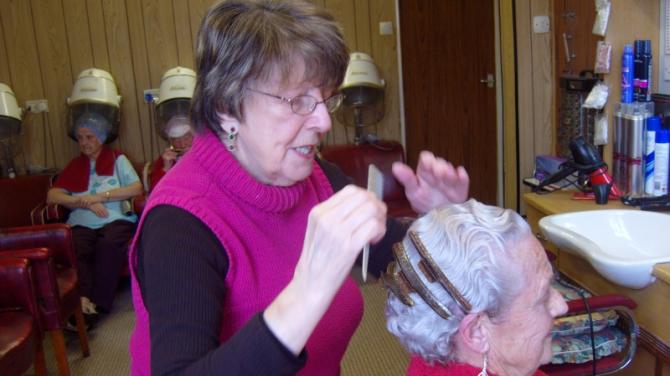 A TYRONE native who is believed to be Britain's oldest hairdresser says she has no plans to retire, after she celebrated 65 years working in the same salon.

Margaret Sherlock, 91, completed her hair apprenticeship in Aughnacloy when she was just 15-years-old, and she later moved to Lancashire where she opened her now renowned salon, 'Hair by Margaret' in 1956.

Marking 65 years since she opened shop in Chorley, a sprightly Margaret celebrated by giving a perm to the first customer she ever served, who is now 90.

"I have no intentions to retire," she told the Tyrone Constitution. "The salon is long established and I have a lot of loyal clients that I don't want to let down. They wouldn’t know where to go if I stopped working. A lot of the younger hairdressers don’t know how to do the styles my customers like.”

"They keep coming all the time, and every week you can set your watch to the time they will arrive. I consider some more like family. It’s been lovely, I’ve loved every minute!"

"Because of lockdowns, we were closed three times altogether since March 2020. However, here was always that excitement when we got to reopen - on July 4 last year, there was a tremendous buzz and all my clients couldn't wait to get back!"

Margaret Sherlock completed her hair apprenticeship in Aughnacloy, when she was just 15-years-old, but there was little demand for hairdressers so she trained as a nurse in Omagh.

Margaret recalled: "I lived right on the border between Co Monaghan and Co Tyrone and I was quite used to Northern Ireland. I loved the scenery and everything, it really is a lovely place.

However, in 1952 Margaret made the life-changing decision to move to England with her sister, where they both worked at Eaves Lane Hospital in Chorley, Lancashire, which is now a housing development.

Later she married Frank, who died 12 years ago, and when her daughter Linda was born in 1956, she opened the salon in her front room on the day she took her new baby home from Chorley Hospital.

The business started off in the front room but soon became a proper salon, with the family living upstairs until 1971.

To this day, she stands on feet for hours on end day after day while tending to her customers, many of whom simply pop in for a cuppa and a chat, while demand remains high for her ever-popular perms!

Daughter Linda, 63, also helps out in the salon after retiring from her job as a deputy head, and having been so inspired by her mum's endearing commitment to her work, she has penned a book on her amazing life.

'Shampoo and Set - 75 Years as a Hairdresser' is proof that if you find a job that you like, then you never feel that your work is done – even at the age of ninety in the midst of a pandemic!

Of the book, Linda said: “I have always enjoyed writing especially about my own experiences. Talking to my mum, I realized that she had lots of stories to tell. There are so many characters too who are varied and interesting.

"This book gives firsthand accounts of times long gone such as the Lancashire Wakes Weeks holidays, working in the Lancashire mills and Walking Days as well as what hairdressing was like long before the glamour of the present day.

"It is also a story of how adversity can be overcome to fulfil your dreams and that hard work and determination can bring its own rewards.

"There also cannot be many hairdressers still working at the age of 91 in a pandemic after fighting back from ill health!”