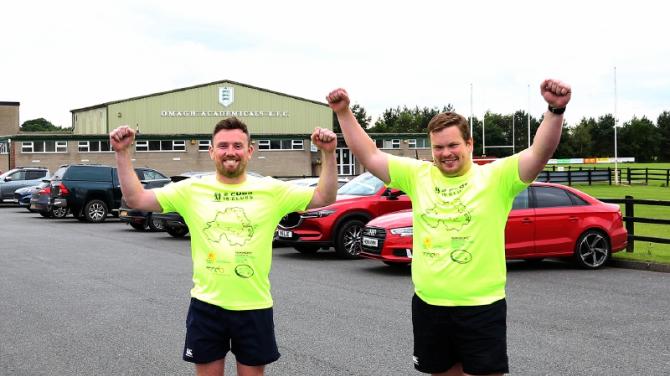 TWO Omagh Accies Rugby Club representatives who walked an extraordinary 200 miles in just six days have raised over £25,000 for charity.

They then made their way by foot to City of Derry, then to Limavady, Coleraine, Ballymoney, Ballymena, Ballyclare, Ophir, Instonians, Cooke, Queens, Lisburn, Banbridge, Portadown and Dungannon before receiving a heroes welcome back at Omagh on Saturday afternoon.

There were emotional scenes as family and friends greeted them on their arrival. Gary and Scott then both enjoyed a well-deserved beer, or two!

In completing this remarkable challenge, the inspirational duo has raised around £25,000 for Parkinson’s Disease, Motor Neurone Disease Association, Marie Curie and the IRFU Charitable Trust.

The charities are obviously very close to their heart and Scott said he is delighted - even if they had to battle through torrential rain and thunderstorms, and blistering heat, throughout their walk.

"The amount of money that has been raised is absolutely insane," beamed Scott.

"We wouldn't have been able to do it without the support of my family and Gary's, who ran support vehicles for us.

"We received lots of messages from people every day, even from people we hadn't spoken to in years. 'Keep going, you are doing great' - that kind of message really kept us motivated."

There were a number of difficult moments during their adventure, but perhaps the first day was the toughest.

"It was fine until we got to Newbuildings and there unfortunately we got stuck in a thunderstorm. We were tired at that stage because we had already walked about 27 miles and still had another eight to go. By the time we got to the City of Derry club, we were like two drowned rats! Unfortunately, Gary's phone got waterlogged. It made us question why we were doing it, but we got through it."

Day three when the lads were walking from Coleraine to Ballymena was also incredibly challenging - but this time it was the sun that was posing the difficulty.

"The sun was beating down on us, we had been walking for three days, and my foot was giving me serious issues," recalls Scott.

"In the back of our minds, we were thinking we had a big day to Belfast tomorrow to get through. But we got a great reception in Ballymena, and some of our mates joined us on the Belfast leg, so that really helped."

Sore legs and tired minds - but the amount of money they had already raised for charity kept the lads going.

"We realised all we had to do was continue to put one foot in front of the other," said Scott.

"We kept thinking about what the people we are supporting actually go through. Our walk doesn't measure up to what they face. We just had to endure seven days of something that is just a bit tough. It put things into perspective. It wasn't life-changing.

"We realised that it doesn't matter if it takes us eight hours or 12 hours to do the walk, we just knew we would get through it.

"Gary and I have been friends for a very long time and I think we know when the other needs a wee hand. So we kept each other going."

It was all worth it when they arrived back to their home club of Omagh on Saturday.

"It was unbelievable. I knew there was going to be some people at the club, but the amount of people who were there to congratulate us was fantastic. It was quite emotional actually.

"We're proud just to get through it, but as I've said, there's bigger issues people have to go through in their every day lives."

To donate to this great cause, visit https://uk.virginmoneygiving.com/2cubs15clubs