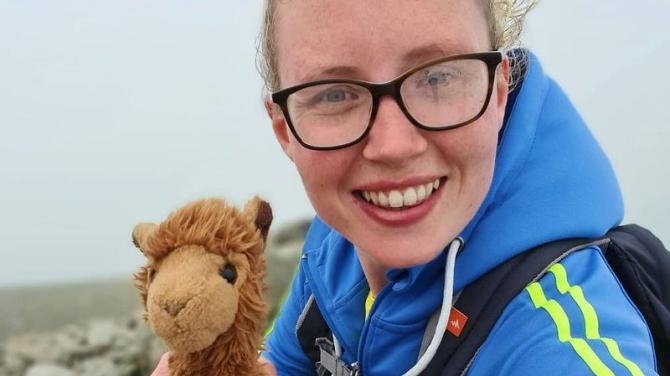 TO mark the third anniversary of the death of her sister Kyra, Omagh woman Alex McKinley will take on two gruelling challenges and raise much-needed funds for Air Ambulance NI in the process.

Alex, with the help of work colleagues from Woodvale Construction, friends and family, will climb seven peaks of the Mournes on August 21 - on the weekend that marks three years since Kyra was tragically killed in a car accident, a challenge she's calling '7 Seven Peaks'. It involves climbing over 700 metres and the group of seven has set the ambitious target of completing it in 12 hours.

It will set Alex in good stead for the Virtual London Marathon on October 3.

Alex began running around six months after her sister's death and has found it has really helped her mental health.

She plans to take on the Omagh Half Marathon route before running the Omagh 5K route on repeat. Quite the task!

"I had planned to do the Virtual London Marathon, but then I thought, maybe I should do something more as well," laughed Alex.

"This will be my first marathon. If I was going to wait until the pandemic ends I could be waiting for a long time, so I just thought I'd go for it.

"Unfortunately there will be no supporters like there would be in London, so it will be the thought of doing it for Kyra that will get me through it.

"I remember sitting at the hospital and thinking if someone told me to run a marathon to help Kyra I have done it without a seven thought. So she will be the driving force behind this."

Training is going well for Alex. On Saturday morning, she completed 15 miles and is currently on week five of a 16-week programme.

It is clear she is benefitting from the weekly runs with her friends within 'Run Talk Run' - a group, founded by Alex, which aims to help those who may be struggling with mental health issues to open up and express themselves while exercising.

Alex will certainly have the benefit of time on her feet, as just two months earlier she will have completed the '7 Seven Peaks'.

"I think it's going to be more of a mental challenge than a physical one. So it's going to get me into the right frame of mind for the marathon."

Kyra had wanted to climb Slieve Donard for charity - but sadly never had the opportunity to, so the 7 Seven Peaks challenge is incredibly fitting for Alex and her group of friends and family.

At this stage, Alex has no fundraising target in mind. But she is confident the local community will once again rally behind her to generate much-needed funds for the Air Ambulance NI - a charity that is so close to her heart and one that requires a total of £5,500 daily to continue to operate.

"Virtually all of the charity's events have been cancelled including the Balmoral Show, the North West, and all of the smaller events such as dinner dances, football matches, etc etc. So yeah, it's very important we get behind the Air Ambulance again. They've been operating throughout the pandemic.

"Without the Air Ambulance, Kyra would not have made it to the hospital - she would have died at the scene," explained Alex.

"Because they managed to get her from the scene, organ donation was able to take place which then has a knock-on effect and helps four other families.

"They allowed us the opportunity to say our goodbyes to Kyra at the hospital. The charity means so, so much to us.