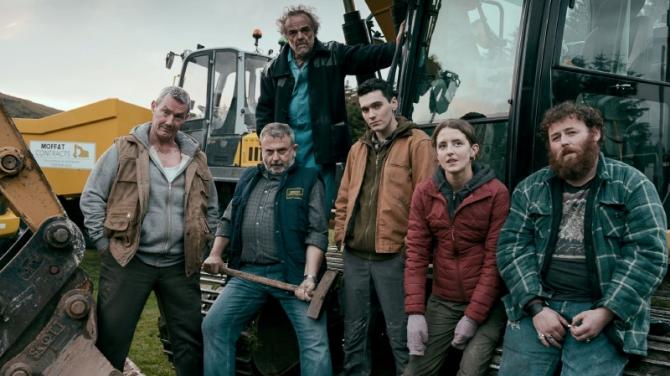 'Boys From the County Hell', a distinctly Irish take on the traditional vampire genre shot in Northern Ireland, is the brainchild of Eskra-born Chris Baugh and former Strabane man, Brendan Mullin.

It is written and directed by Chris and produced by Brendan and Yvonne Donohoe.

A special screening of the horror film took place in Belfast on August 4 ahead of its general release.

'Boys from County Hell' is also Chris and Brendan's second feature film following 'Bad Day for the Cut' in 2017.

The film was entirely filmed in Northern Ireland and is the latest in a growing number of films that have been written, directed and filmed here.

Since receiving its world premiere at the prestigious Tribeca Film Festival’s Midnight section last year, it has gone on to screen at numerous festivals globally including the Panorama Fantastic section at Sitges, Virgin Media Dublin International Film Festival and locally at Belfast Film Festival last year.

The film follows strange events unfolding in Six Mile Hill, a sleepy Irish town that claims to have been traveled by the framed author Bram Stoker, when construction on a new road disrupts the alleged grave of Abhartach, a legendary Irish vampire said to have inspired Dracula.

Deadly and sinister forces terrorise a work crew led by Francie Moffat and his son Eugene, they’re forced to fight to survive the night while exposing the true horror that resides in the town’s local myth.

“We were delighted to hold a premiere of Boys from County Hell in Belfast," said producer Brendan.

"We recognise the past year has been a difficult one for cinemas across NI and beyond, so it’s great to see their doors reopen and welcome back all those who enjoy movies up on the big screen.

"Hopefully audiences will have the same blast watching Boys From County Hell as we did making it.”

Speaking of the film's general release, writer and director Chris added: "It’s been a long time coming. When I wrote Boys From County Hell it was always a hope that audiences would get to experience it on the big screen.

"When I actually got to make the movie I had the best cast, crew and partners I could wish for and it’s a testament to everyone's hard work and talent that the film is about to be released into cinemas all over the country."

Established in early 2013, Wildcard is currently Ireland’s most successful film distributor having released the biggest Irish titles of the last few years including Black 47, The Young Offenders, Cardboard Gangsters and the Oscar-nominated Wolfwalkers.

CEO of Wildcard Distribution, Patrick O’Neill said: “From the very first time I met Chris and Brendan several years ago, I knew instantly these were filmmakers I wanted to work with.

"I am so delighted that they are fulfilling their promise that was so evident back then, and we are having the chance to work together on Boys From County Hell, a film that is going to thrill audiences in Ireland and far beyond.”

Cinema locations were 'Boys from the Country Hell' is showing.