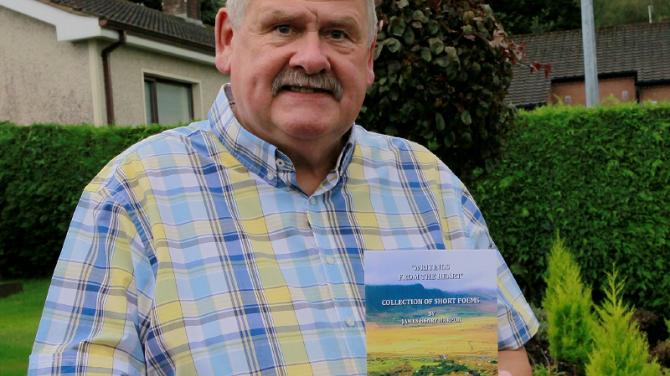 A FIVEMILETOWN man has published a book featuring a collection of poems inspired by his beloved late wife.

The proceeds of James Harpur's book - in memory of Dorothy - will be donated to units in the South West Acute Hospital (SWAH) who gave her exceptional care in her final days.

To mark their 30th wedding anniversary in 2013, James wrote a poem for his wife which was a love letter and an ode to the wonderful years they had spent together.

Sadly, Dorothy passed away in November, 2020, after a long battle with COPD (Chronic Obstructive Pulmonary Disease).

In her memory, James decided to write more poetry, and along with his first poem inspired by their milestone wedding anniversary, he has collated a book of 12 poems.

“I always would have written poems in the past," said James.

“Following Dorothy’s passing, I just got thinking, I must write a wee poem about her. I just progressed on and I managed to write 12 poems; one of them is from our 30th wedding anniversary in 2013.

“A week after Dorothy passed away, we would’ve been 37 years married.”

Describing some of the poems that comprise the book, James said: “The first poem is called ‘Queen of my Heart’.

“My second is ‘Dorothy’s Shrine’, we would have a room here that we had been doing up, a bedroom, and Dorothy had all the stuff got but we never got around to doing it,” he said, explaining the context of that particular poem.

“Then I have another called ‘Simply the Best’. Those three sort of make up a trilogy of praise for herself,” he added.

Other poems in the collection are based on themes of loneliness, memories and reflection.

James has also dedicated one of the poems in the book to Dorothy’s good friend and cousin, Henrietta ‘Henny’ Fawcett and her late husband Eddie, who passed away earlier in 2020. It is titled 'The Perfect Couple'.

Talking openly about his wife’s courageous battle with COPD, James said: “Dorothy had been very ill for the last three and a half years.

“From July, 2017, she suffered from COPD and she was taken into the hospital and consequently over the past year, up until her death last November, she was in and out of the hospital, needing attention.

“She deteriorated over the years, and she was just in the final stage of COPD. She went into the hospital last October and she was in for three weeks. When she came out, she required oxygen.

“She was out no more than a week and she had to go back,” he said, noting that following this admittance to hospital, Dorothy “never came home”.

In appreciation of the exceptional care his wife received from the units at the SWAH, James has decided to donate the proceeds of the book to different units at the Fermanagh-based hospital.

“Dorothy was in intensive care at the SWAH and was on life support for three days in July 2017. She then had to go to the cardiac ward for a month.

“Dr. Monaghan is in charge there and she was very good.

“When her blood oxygen would go very low, we were told to go directly to A&E. They were always very good in A&E as well. That will be what the money will go towards,” he said.

The poetry book is now available to purchase from McKeagney’s SPAR in Tempo, and Clabby Filling Station.

In James’ home town of Fivemiletown, the book is for sale in Ballylurgan Hardware, The Valley Hotel, Beatty’s SPAR, Downey’s Jubilee Bar, and the MAPS office in Omagh.