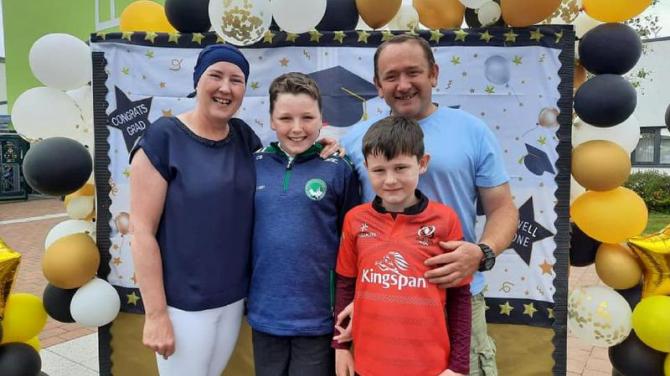 A LOCAL teacher whose dedication to others has made a difference not just in the classroom but in the community has reached the final of the Spirit of Education Award category in this year’s Sunday Life Spirit of Northern Ireland Awards with Ulster Bank.

St Dympna's Primary School, Dromore, teacher, Cathy Burns, was nominated for the category, sponsored by Harbinson Mulholland, by a colleague who said of her: “The world would just be a better place if it had more people like her."

Described as someone who “lights up a room”, Cathy not only works tirelessly for the children of St Dympna’s PS, but also motivates her colleagues and volunteers in a host of local community groups.

It came as no surprise to those who know her that during the pandemic she devoted her time to others, making PPE for frontline workers and her local community.

She managed to set up a team of 24 volunteers who sewed night and day to meet demand — producing more than 3,000 masks in nine weeks.

Her nomination explains: “Although Cathy is ALWAYS helping others, it was during the pandemic that she really became an unsung hero.

“When the news was consumed by PPE shortages locally and all over the world, Cathy watched a YouTube tutorial and the mask making began.

“During lockdown she also continued to work in school to support the children of key workers.”

Cathy’s dedication to her community and the humble way she goes about helping people and cheering them up have made her a hero in the eyes of those who know her.

As one friend said: “To sum up Cathy… her positivity is just infectious and she is a true gift to the people in her life. Her kindness and generosity inspires others to be better people. “

The vice-principal of her school described her as “the one person who no matter what the circumstances always puts others in front of herself."