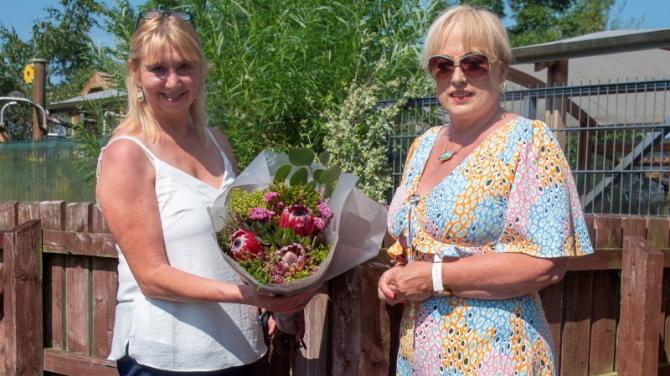 AFTER over three decades as leader of the Sugar and Spice Playgroup in Drumquin, Bernadette McCrossan is to retire.

The Drumquin and wider community want to express their appreciation to Bernadette as she draws her leadership of the local playgroup to a close after 31 years.

"The playgroup has been a marvellous facility for our early years kids," said Fr Kevin Mullan.

"It radiates the vivacity and energy that are Bernie’s trademarks.

"Colour, activity, nature, stories, lego, food and fun have been among the kaleidoscope of experiences that the participating kids have had, as well as a start on the more serious requirements for a future in farming, pharmacy or football."

Bernie had been doing office work in Hugh Maybin's garage in Strabane when she was approached by Marian Martin on behalf of Teresa Poyntz, Maura Lunney, Shirley O’Kane and Diane Patterson who saw Drumquin’s need of a playgroup and spotted her potential.

It wasn’t in Bernie’s mind and she had to be persuaded. After training with Sandra Preston of the Strathroy group and an interview she was offered the main post. ‘It’s you that the panel wants.’ Thankfully she said yes.

Ella O’Kane was happy to become her assistant. They were initially based at the Youth Centre beside Gerard McKenna’s shop.

Eugene McCanny and Paul Devenney helped to put out and take in the toys and equipment every day.

Marie McMenamin (Willmount) was now on board, and when Heather McCaskie brought her child she stayed on to join the team.

"This playgroup was for all sections of the community and would feed into both our schools," added Fr Mullan.

Sugar and Spice moved to the Old Mill at Duncans, picking up Carol Harpur and Anne Devenney on the way. George Kerr of the Development Association indicated that an enterprise centre was being established on the Castlederg Road and would have suitable premises.

During the transition, they had accommodation in the Presbyterian church hall.

The final destination came with the creative and crafty Connie Skelton attached.

Bernie spearheaded funding and future planning, resulting in an outdoor play area, a secret garden of trees and flowers and hiding places where the kids could learn about nature, watch the butterflies, and pick the fruit from what they planted and bring it home.

A new wing was added in 2012. The playgroup won outstanding commendations in its various inspections.

Fr Mullan continued: "It was the place for our kids to be. When intake was high, two sessions were needed each day. When the Department capped intake, there was great disappointment.

"Sugar and Spice has been good for Drumquin. It was a good meeting place.

"On one occasion Lady Moria Hamilton, the Duke of Abercorn's sister, called for tea. She was patron of the Early Years movement and had a particular admiration for Bernie’s leadership.

"She follows the tracks of her past pupils and finds herself stopping sadly at the memory of Marc McNabb.

"She is now going to do some office work for her son Conor at KES in Strabane, the town where she started her working life.

"Her lifetime devotion to her husband Patrick is unfailing."