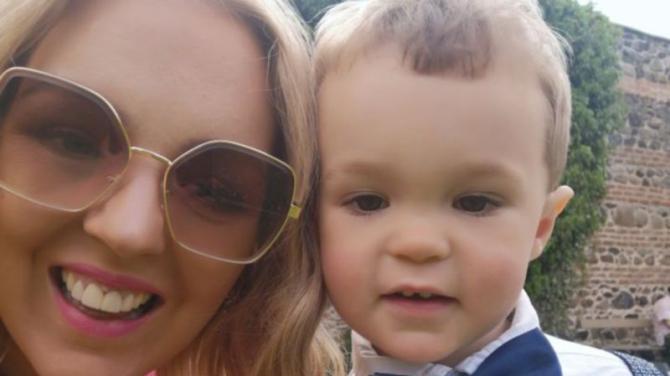 AN Omagh school teacher who is flying to Mexico to undergo life-changing treatment in November has set up a crucial fundraising page to help with the costs.

Zola Graham, who is a teacher at St Joseph's Grammar School, Donaghmore, was diagnosed with Multiple Sclerosis a week before Christmas in 2019 following a significant attack on her spinal cord that prevented her from working for five months, less than a year after having her first baby, Danny.

One of the first symptoms she felt was the 'MS hug' where you feel as if you have a tight band around your chest or ribs or pressure on one side of your torso. As you can imagine, this made breathing very difficult.

Sadly, within the year, Zola had suffered a second relapse.

Even today, she has ongoing symptoms that never go away - numbness, tingling, tremors and issues with her bladder.

"I've been on two different medications since, but these only slow the relapses down by 50 per cent, so my MS will continue to progress, albeit at a slower rate," she said.

"Since diagnosis, I've had increasing issues with my symptoms, and each day I live in fear of another relapse that will cause significant damage, resulting in permanent disability.

"The constant worry of MS is almost, but not quite, as bad as the physical stress - every wee niggle or feeling has me panicking like mad! I'm on high alert every day.

"I worry about how I might not be able to do things with Danny when the disease progresses.

"It is this fear of the future that has resulted in me deciding to go for HSCT, despite how difficult it is going to be."

On November 21, Zola will travel to Mexico for Haematopoietic Stem Cell Transplantation - HSCT - which is effectively a bone marrow transplant. However, this will come at a significant cost.

This treatment is available on the NHS, but the strict criteria mean that patients only get it as a last resort, when the disease and disability is already very advanced. HSCT won't undo any damage already caused, but is 85 per cent effective in halting the disease progression in patients who get it early in their diagnosis.

"We are trying to fund the HSCT ourselves but are also going to host a range of fundraisers to help with the costs of this expensive treatment," she said.

"A huge thank you to those who have already offered their help. Any additional support is hugely appreciated."

A coffee morning will be held at Cafe 32 at St Enda's GAA Club on Saturday, September 11, in a bid to raise further funds. A walk up Cuilcagh will also take place, most likely in October.

A raffle is also taking place and you can enter by sending an email to zolamsfund@gmail.com.