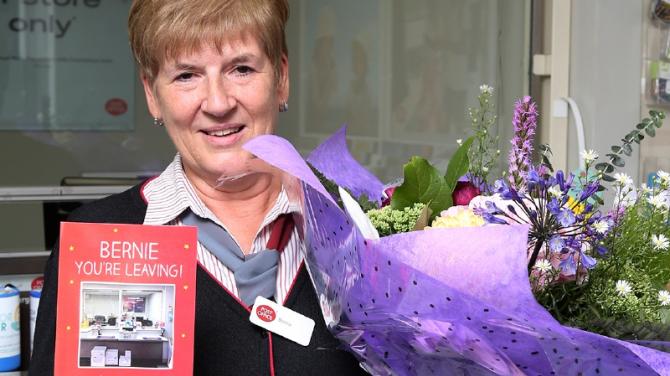 AN Omagh Post Office worker who "always lent a listening ear to customers" has retired after some 43 years service.

Having stepped down last week, Bernie Byrne, from Omagh, said local Post Offices have always been a "community hub" - and a hub which she has been at the forefront of for over four decades.

Bernie started her prolific career in Strathroy Post Office, which was established by her parents 1978. She stayed on to offer her services even after the office passed over to new ownership, and serving for a period as Post Mistress.

She later moved to the Post Office at McCullagh's Centra, Campsie, where she has spent the last six years. She said retirement will bring extra time for family, and her beloved grandchildren.

"A Post Office is a very important part of the local community," she said. "Even way back then, I would have had customers coming in and telling their wee stories, or anything that might have been bothering them.

"If anything was worrying a customer, you gave them a listening ear, and it was nice to be there to help if you could. It was very family orientated back then, and even now people still come in to have a friendly chat!

"There have been many changes over the years in terms of how a Post Office is run. In the early days there were pension books, child benefit books, milk tokens, and much else to sort. Everything was done on paper. Now everything is all online on a system.

"Everything is now computerized, and there isn't not as much paper work. Everything used to be done with pencil first, and then pen, but times have changed!

"I will miss my colleagues and the customers coming in. However, I am looking forward to extra family time, and looking after the grandchildren.

"I would like to thank the McCullagh family for the last six years, as well my co-workers, Hilary and Linda, who worked alongside me in Campsie. I would also like to extend thanks to the local community for all their support over the years."