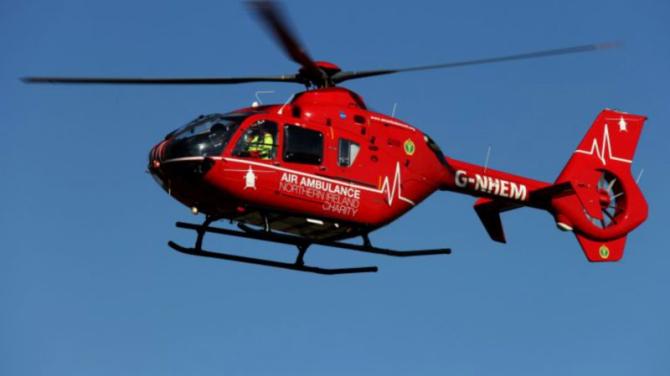 A LOCAL DUP councillor has praised Air Ambulance Northern Ireland, which airlifted his son to hospital after he found himself trapped under a machine.

Sustaining an injury to his pelvis during the accident, he was seen to by Ambulance crews before the decision was made to call the Air Ambulance, which swiftly airlifted him to the Royal Victoria Hospital, Belfast.

He has since had an operation and according to Councillor Kerrigan, is on the "slow road to recovery".

The incident comes mere days after the Air Ambulance was tasked to another incident on the Garvetagh Road, where a young girl was airlifted to the Royal Victoria Children's Hospital following an accident. The incident took place on Sunday, August 22, and also required the assistance of both NIAS and the NI Air Ambulance.

Describing the work of the Air Ambulance as 'vital' Councillor Kerrigan said: "On Sunday past, I like many others saw the Air Ambulance circle above the village of Garvetagh before rushing a young girl to the Royal Victoria Hospital in Belfast.

"Little did I think on Wednesday afternoon, the same Air Ambulance would be taking my eldest son to the Royal.

"He had been briefly trapped under a machine, injuring his pelvis. Thankfully the work of the Northern Ireland Ambulance Service kept him stable before a decision was taken to get the Air Ambulance to take him to Belfast.

"The professionalism of the Ambulance and Air Ambulance Service was second to none-they helped to put the patient and us at ease."

Councillor Kerrigan continued: "In early July at a family wedding, there were favours on the table, where the happy couple had made a donation to Air Ambulance Northern Ireland on behalf of their guests.

"Suffice to say, this has always been a charity close to my mind. Representing the Derg DEA I know that many around the Castlederg area are a 45-minute drive to either the SWAH in Enniskillen or Altnagelvin Area Hospital.

"We are well aware of the Golden Hour after an incident which can be key to a patient’s survival, and given the driving distance to the two closest A&E Departments the Air Ambulance Northern Ireland is vital for residents of West Tyrone as they can travel from Castlederg to Belfast in 30 minutes.

"The Air Ambulance Northern Ireland is a Charity, solely funded through donations from the public and businesses. It costs approximately £5,500 a day to fund the service which equates to £2m a year. This is a vital service which can be a lifesaver for us in the West.

"If you see someone raising funds for the Air Ambulance Northern Ireland, I would encourage you to donate and support it, as you do not know when you will be in need of it yourself or for your loved ones."