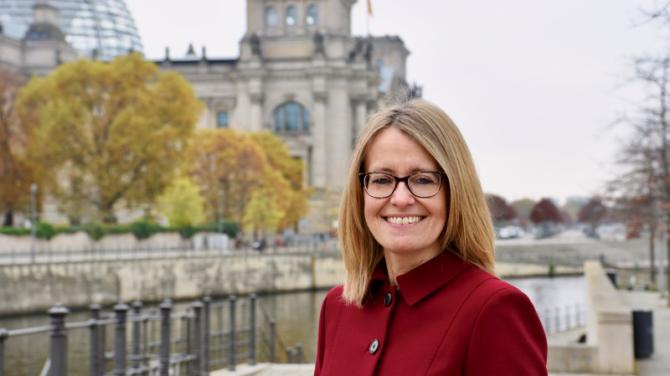 A HIGH-flying diplomat from Northern Ireland serving as the UK’s Ambassador to Germany has told how she always assumed she’d have to give up her career if she ever started a family.

The 53-year-old mum-of-two is one of the women who have made it a female clean sweep representing Boris Johnson’s government in all of the world’s key postings.

Women will represent the UK in Germany, the US, China, France, Italy, Japan, Australia, Russia and the United Nations in New York.

Jill’s rise is all the more remarkable when you consider that the Foreign Office banned women from diplomatic roles until 1946 and required women to resign if they got married until 1973.

The first married female ambassadors were not appointed until 1987 - eight years after Margaret Thatcher the UK’s first female Prime Minister.

And Jill admitted: “To be perfectly honest, when I joined the Foreign Office in 1991, I’d always thought I’d have to leave if I got married and had kids.

“All the senior women seemed to be single or not have children and so the message that sent was that, actually you cannot do this job and have a family, if you are a woman.

“My husband and I didn’t marry until our late 30s. When I had my first posting as an Ambassador to Lisbon in 2011, our sons were only aged three and one.

“I remember at the time, I could not find a female British Ambassador who had done the job with such young children.

"It’s very different now, but back then I remember being very nervous about all of the evening commitments. I thought, ‘I’ll just have to do my best’.

“Having a very hands-on husband helps. Moving around, I used to think I’d have to marry a poet who could sit on a mountain wherever I was posted but I married a civil servant who is very portable.

“When my boys were toddlers, I would always try to go home for five o’clock for tea and bath-time, then I would go to a reception and be like an Exocet missile, talking to the most important people, and then escape so I could be back for bedtime as often as possible.”

Jill added: “It’s just bizarre now to think that in my lifetime female diplomats were required to quit if they got married.

“My generation are now the first to do this job with working spouses and kids and we are definitely heading in the right direction.

“I’ve worked with all of the female Ambassadors currently in the key roles and it’s almost like a sisterhood because we’ve come up the hard way.

“When we started, you’d look up and not see any people like you, so many of us spend a lot of time mentoring younger female diplomats. None of that existed 20 years ago.”

Jill was appointed as the UK’s first female envoy to Germany in November – tasked with managing Britain’s relationship with Chancellor Angela Merkel’s government.

And Jill said: “I started the job two months before the end of the EU exit transition period and the turning of that page after the lengthy negotiations.

"Chancellor Merkel is stepping down this autumn after 16 years of leading the German government so it is a pivotal time in our relationship.

“Many Germans are openly disappointed that the UK has chosen to leave the EU but at the same time they are pragmatic and understand it was a democratic decision.

“The UK-Germany Joint Declaration is all about how we look forward and work together on the big global challenges.

"Our force for good agenda really chimes with a lot of what Germany foreign policy is on issues such as climate change, democracy, human rights, and international development.”

She added: “I had more VIP visits in my first month than I had in three years in Portugal, which says a lot about the importance of Germany to this British government.

“In my first week, we had HRH The Prince of Wales here and he made history as the first British Royal to address the German parliament. Two weeks later, the Foreign Secretary was over and the Chancellor of the Exchequer was here the following week.”

Jill was born in Omagh before her family relocated to Co Antrim aged two.

She went on to study French and Spanish at Edinburgh University and can now also speak German, Portuguese and Czech.

As Northern Ireland marks its centenary, Jill believes her upbringing during the Troubles may have helped her make a success of her career in diplomacy.

Jill explained: “Growing up in Northern Ireland during the worst years of the Troubles definitely gave me a desire to see more dialogue, less conflict.

“When I say to people 3,000 people were killed in that conflict – same as the Twin Towers – people are surprised and say ‘Really? Was it that many?’.

“My parents wanted to protect me and did not let me see the news until I was at secondary school. I was initially pretty oblivious to what was happening just 10 miles away in Belfast - but not totally.

“As I got older, I started to realise it wasn’t normal to have to agree on a Plan B meeting point if there was a bomb scare when we were out shopping in the city.

“I remember once visiting my granny’s farm near the border and we were climbing trees and a helicopter flew really low and soldiers hung out of it looking at us. I remember thinking ‘The Famous Five never had to deal with this’.

“I’ve lost friends to terrorism. I was posted in Madrid when the Good Friday Agreement happened in 1998. I still remember that being the end of 30 years of violence and watching it on TV and bursting into tears.

“I remember that feeling of relief thinking ‘It’s over. The next generation will not have this hanging over them’. That really inspired me and gave me hope for the future.”

And Jill added: “It’s funny because I was on holiday in Petra in Jordan in the mid-2000s. My friend Catherine and I saw snipers on the roof of our hotel and discovered our trip had coincided with the Davos economic forum.

“Bill Clinton visited the famous Petra archaeologicalsite the same day as we did. When he and his security entourage wandered past us, I shouted out in my best Belfast accent ‘Mr Clinton, thanks for all you did on the Northern Ireland peace process’ and he came over for a chat.

"He asked me how it was nowadays, and I said, ‘It’s so much better’ and then he said ‘David Trimble’s up there. Do you want to meet him?’.

“You can imagine what David Trimble was thinking with Bill Clinton introducing him to a woman from Co Antrim in the middle of Petra. I didn’t even tell them I was a diplomat.

“The Good Friday Agreement always offers hope that diplomacy can achieve such wonderful things and I genuinely think that’s the reason I love my job so much. It’s about understanding different peoples’ viewpoints and finding solutions.”

For more info on Northern Ireland’s centenary go to ourstoryinthemaking.com/