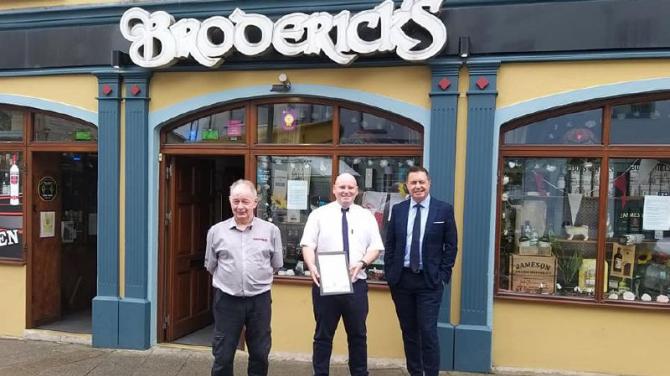 AN Omagh bar and off licence owner has said he is "delighted" to see his premises named as one of this year's High Street Heroes.

Broderick's Bar, which is operated by local man, Colm Broderick, was placed third in the 'Best Off-Licence' category in the competition, which is conducted by Retail NI, a representative body for the independent retail and wholesale sector in Northern Ireland.

Mr Broderick is also president of Omagh Chamber of Commerce, and through the years has strived tirelessly to promote and enhance the local retail and business sector.

Speaking on the honour, Mr Broderick said: "We are delighted that the Off-Licence was put forward in the competition, and even more delighted that a considerable amount people took the time to vote for it.

"It's a great boost for ourselves and gives a confidence boost to the local business community. It is recognition for remaining open throughout the pandemic, when we were there for our customers and those who needed. We are thrilled."

Speaking on the High Street Heroes competition, chairman of Fermanagh and Omagh Council, Errol Thompson said: “Retail NI’s campaign puts the focus deservedly on our independent retailers, who have had to be more resilient than ever over the past 18 months. I am extremely proud of the independent retailers in Omagh and the contribution they make to our community.”

“Retail NI’s campaign ensures the service and innovation independent retailers bring to the high street is rightfully recognized and provides encouragement to our retailers through an extremely tough year.”