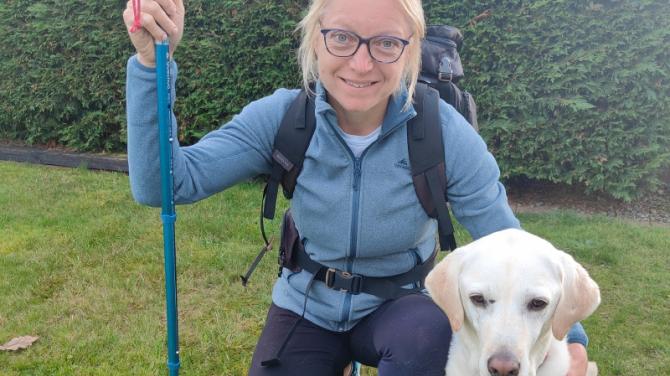 OVER the first weekend in October, a local animal lover is set to undertake a mammoth challenge in order to raise funds for a rescued dog in desperate need of help.

Lynda Hill, who owns Canine Care - in the Gortrush Industrial Estate - is preparing to take on the 'Mourne Wall Challenge' to raise funds for 'Sadie', a little dog in her care. This challenge, which she aims to do on Saturday, October 2, and Sunday, October 3, will follow the route of the 22 miles long Mourne Wall and will see Lynda climb a total of 15 peaks in the two days, including seven of the 10 highest mountains in Northern Ireland.

"I have been training for this challenge, along with Malcolm my husband, over the last couple of months and many times, when the going has got tough, I have asked myself why on earth I’m attempting it at all," explained Lynda.

"The reason is simple, it’s to help raise enough money for a new hip for Sadie."

Sadie, a golden Labrador, has had a lifetime of mountains to climb as she has faced one hurdle after another.

Lynda continued: "Found injured on the streets of Serbia, Sadie was taken to Ub Dog Pound where I travel to in Serbia, alongside my colleague Alison Lennon, twice a year to volunteer.

"There, Sadie spent over two years with no treatment until, on one of our trips, we noticed her amongst the other 150 dogs with severe injuries.

"After that, we arranged to have her x-rayed. It was only then discovered that Sadie had a broken and dislocated elbow on her front leg and on top of that a severely smashed hip.

"The vets in Serbia said they were unable to perform the surgery Sadie needed, and at that point, we started putting things in place to get her to Northern Ireland in search of help.

"After a fundraising drive back in 2019, which you may remember included me running two half marathons for Sadie, with the help of the public, Sadie finally made it to Omagh on August 18, 2019."

After her arrival in Tyrone, Sadie received multiple treatments to help ease her pain.

Everything helped a bit, however, unfortunately in October last year, after the pain became so severe in her elbow, Sadie had to have her front leg removed.

"This was a huge loss but one that saw her bounce back to life with her painful elbow gone," added Lynda.

"For the first time in years, Sadie was really enjoying life. However, still with a broken hip, Sadie’s days of living life to the full soon started to disappear again.

" Her hip has now become so bad that she is once again in unbearable pain.

"The only chance of Sadie getting relief now is for her to get a full hip replacement.

"This will cost approximately £5,000 and thankfully after a number of fundraisers throughout September ran by our little charity, Animal Support Trust, I’m so pleased to say we have already £4,000 raised.

"I am now hoping that through sponsorship for my Mourne Wall Challenge we will manage to raise the final £1,000 and get Sadie the surgery she desperately needs.

"If so she will have her operation on Thursday, October 21, at Gilabbey Veterinary Hospital in Cork. Sadie now desperately needs to get out of pain and to give her the best chance her surgery will be performed by two specialist surgeons from Cork as well as a third surgeon who will fly in from England for the surgery.

"If anyone can help Sadie by making a donation towards my challenge it would be just fantastic. Donations can be made through PayPal to info@animalsupporttrust.com or on my GoFundMe page at gofundme.com/f/mourne-challenge-