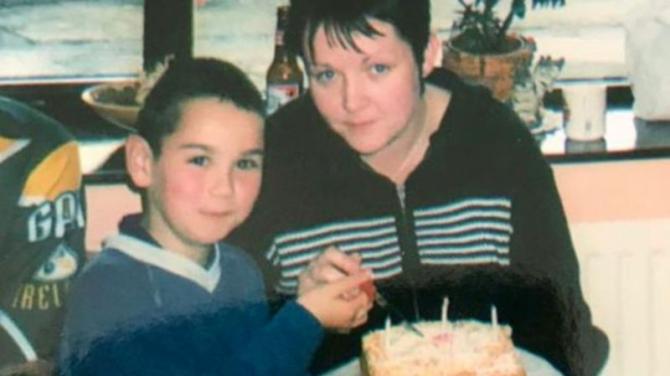 A SINGER songwriter from Ballygawley has released a song in memory of his beloved aunt Nuala McLaughlin, who lost her life to Coronavirus last year.

Nuala, who was a highly popular and respected employee of the Western Trust, sadly passed away at the South West Acute Hospital (SWAH), Enniskillen, on Tuesday, December 22 last year and was laid to rest on Christmas Eve.

She had tested positive for Covid-19 the month before.

"In the days between her passing and the funeral I started putting down the words that were in my head onto a piece of paper," Paschal explained.

"They were just words, it wasn't supposed to be anything more.

"Thinking back to it, it's nearly a blur to be honest because it happened at a time when I was just trying to process everything. To me, it almost felt like I was holding the paper and Nuala was writing because the words just flowed and everything came out. Usually, when I sit down to write a song it can take weeks and months, years even. But this song was created in practically one night.

"I kept coming back to that piece of paper in the months afterward, and one night I decided to bring it to a friend of mine, Liam Lawton, who is a composer.

"I told him it may be a complete waste of time, but he came back and said there was definitely something in there that we could work with.

"He made a few tweaks to it, but nothing major, and he actually wrote the music to the song."

The final result was a beautiful record called 'We Were Wondering!'.

The song had the blessing of two Nuala's children, said Paschal

"I was always conscious that whatever I did, they had to be happy with it," he explained.

"They told me 'mummy would love for you to do this'.

"It was something I had wanted to do for Nuala because she was a massive part of my life," continued Paschal.

"She was the person that was always there when I needed support or advice. She was always at my gigs. She always wanted me to do well.

"She was practically another mummy to me. She knew a lot more about me than probably anyone else knows. No matter what it was, she made it all OK.

"That's what the hardest thing is, losing someone with that massive piece or link of my life that no one will ever replace."

Paschal's singing career began during his school days at St Ciaran's College, Ballygawley. The song has not only brought comfort to Nuala's friends and family, but Paschal also hopes it can help others who have lost a loved one.

"In the back of my mind, I always thought this song would bring comfort to others who have lost a loved one, and thankfully it has because it's had a great response so far.

"It has hit home to others who have lost someone to Covid-19 and any other death, young and old. It's something everyone can relate to.

"Nuala was such a big personality and if you saw her once, you would remember her. This is a song in her memory."

'We Were Wondering!' is available on Apple Tunes, Spotify, Amazon Music and elsewhere.