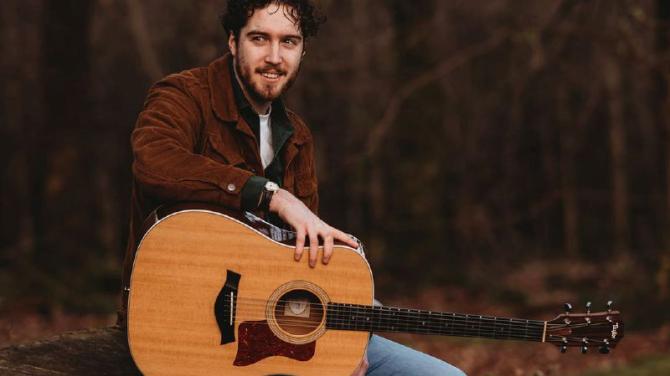 FOR many artists, lockdown was a rare chance to pause and reflect, and in the case of Carrickmore singer-songwriter, Aiden Scott-Browne, it was a chance to go in a completely new direction altogether!

Aiden, a talented local guitarist and vocalist, said lockdown was a "turning point" in his musical style when he, like many others, found himself confined to the four walls of his bedroom, with little more than his beloved guitar and a brimming songbook.

It was a rare opportunity that allowed him to delve into a menagerie of new playing styles, and the fruits of his lockdown-labours are clear for all to hear.

A scintillating mix of bluegrass and country with inspiration drawn from the likes of Bob Dylan and Simon and Garfunkel, Aiden's eclectic new style has enthralled audiences in local venues in recent months, including Bogan's Bar, McCann's Pub, and the Strule Arts Centre.

Aiden explained: "What I have been doing post-lockdown is very different to what I was playing before. Lockdown was a bit of a turning point for me really. The situation meant I had a lot of time in my room, scratching my head and asking myself 'what do I do?'

"This brought me back to when I was a teenager, when I would just practice my instruments and listen to music. So that's exactly what I did - it was just myself and my instruments, and I listened to stuff, and got into music that was challenging to play, such as bluegrass and different forms of country.

"I was listening and playing a lot, simply because I had the time. I did a lot of work during lockdown to bring my guitar playing up to speed, and honestly, it was really nice.

"I didn't get much time to practice before lockdown so I didn't really develop, but I remerged after it all with all this new material that I wanted to try out, including Bluegrass and Americana kind of stuff, that I had never played live.

"I would describe the style as toe tapping with fast, firey guitar licks. It's high energy acoustic music, blending elements of bluegrass and country with a real old timey kind of vibe, harking back to roots music.

"For some reason or other, I had it in my head people didn't want to listen to this, but I worked hard on it so I decided to showcase it."

Keen to showcase his new style, Aiden started a Youtube Channel and began posting content. To his surprise, he was soon approached by the Strule Arts Centre about the possibility of a live stream performance.

During the lively gig he was accompanied by local bassist, Danny McCormack, and the pair covered hits from Johnny Cash and John Prine, and also presented a few originals.

Aiden explained: "The Strule Arts Centre got in touch with me asking me to do the stream, and I said of course I would! I really enjoyed it and hope to play similar gigs in the future.

"The gig really focused my learning in that kind of music, and when it came time for pubs to reopen and live music was back, I decided that I would play that music live and see how would be received.

"So far it's went really well, and people are really taking to it. It's given me the opportunity to play with a few really good local musicians, including Danny Mccormack (bass) and Keelin Hutchison (keys). We have been able to get a feel for the energy of the music, as that's what translates to the audience.

"This past while we have been playing a lot in Bogan's and McCann's, and we have been trying to polish the set list to see what works best. We have only been playing this style of music for about five months, and there's work still work to be done on the set list, but there's progress being made.

"With each gig, you notice things that are starting to come together. Of course, it's just a lot of fun and its lovely to be back. Playing by yourself can be lonely, but when you are with others, you have them to bounce off.

"It's not really about singing the right notes or getting the words 100 percent right, the most important thing is getting the energy across. That is the most infectious part of live music, and since I have been playing more of what I want to play, there's a lot more in it for me."

It's no surprise that Aiden cites Bob Dylan as a major musical inspiration, with the Carrickmore singer's style reminiscent of the folk, blues and traditional flavour of the famous American singer-songwriter.

"My main inspiration has to be Bob Dylan," Aiden said. "His songwriting is better than anything I have heard before, and his lyrics have such a freedom to them. I do a bit of writing myself and I have always found the freedom in his lyrics to be very inspirational. His words take a life of their own, and this is something I am striving to do within my own work.

"Of course the list goes on and on in terms of artists I am inspired by - Billy Joel, Elton John, The Beatles, Paulo Nutini, I could go on and on!"

Aiden continued: "In terms of the future, at the moment I am working to get the set list nailed down as best I can. As an artist, I don't want what I am playing to be over rehearsed, as I don't want to take out freshness of it - I want every song to feel fresh.

"The three of us will keep playing around Omagh and I feel each time we are getting better, and our music is getting tighter. I aim to branch it out, and if I could get a few gigs in other music venues, that would be a good starting point for us.

"Just to be able to play in a place where people are actively seeking new music would be great. I am doing a lot of covers right now of somewhat niche songs, and I want to sneak in one or two of my own tunes into it. It will be a slow burner, but we will get there slowly but surely!"