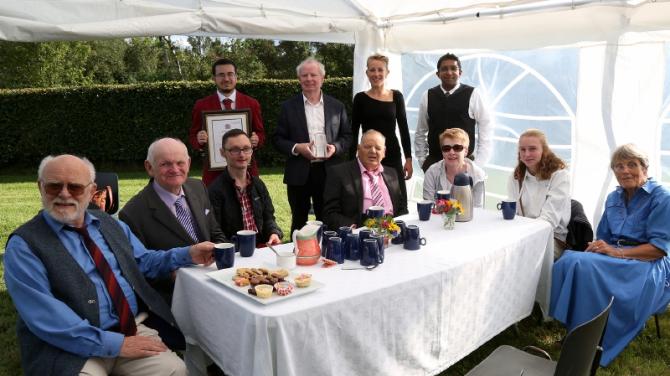 THE Queen’s Award for Voluntary Service aims to recognise outstanding work by volunteer groups to benefit their local communities. It was created in 2002 to celebrate the Queen’s Golden Jubilee.

This event was a joint presentation to two local volunteer groups, Camphill Community Clanabogan, and St Eugene’s Band, Omagh and was celebrated on the grounds of Camphill.

Cherry How, a vocational coworker volunteering at Camphill Clanabogan since 1990, describes what the Award means to the organisation: “We are thrilled and honoured to receive this prestigious Award for our work. It is the highest Award a voluntary group can receive in the UK. We are very proud to have been chosen and have all the hard work recognised.”

"The award gives recognition to the hard work and commitment undertaken by band members to provide a musical presence in our community.

"We also recognise the support given by our families and the wider community which allows the band to perform throughout Omagh and the district of Tyrone and bordering counties."

Since Camphill began 81 years ago near Aberdeen in Scotland its aim has been to build a community life including people with and without learning disabilities, living and working together to uphold each other in a spirit of love and service for the wellbeing of humanity and the earth.

Camphill has since grown into an international movement of more than 100 centres in many countries, with short and long-term volunteers of all ages and backgrounds joining from all parts of the world.

Camphill Clanabogan, situated in rural County Tyrone, is a sustainable village community with a biodynamic farm, vegetable gardens, various craft workshops and is home to a permanent community of around 50people plus 15 young volunteers who come each year and 40 employed staff members. It aims to build an inclusive life for people with and without a disability. Volunteering at Camphill Clanabogan can be a life changing experience for many people.

Cherry said: “Since 1984, when we began, we have been dependent on the support and hard work of all our volunteers sharing their lives with our residents. Our volunteers bring more than just hard work and dedication, they enrich the place with their new ideas and expertise”.

The award also pays tribute to the large numbers of supporters who have given their time and energy voluntarily over the past 35 years: the Friends of Clanabogan, Trustees, donors and fundraisers, parents and families and all our local volunteers and international coworkers from over the past years. Unfortunately, Covid-19 restrictions limited the event to only a few representatives.

“We would like to thank all our volunteers for their contributions in time, dedication and hard work," Cherry added. Without all these people we would not have achieved everything that exists today.”

"Last but not least we must include our residents and day attendees who together with us enthusiastically help build up and maintain the community by their work and participation.

“Camphill was founded on volunteering and we hope that this Award will inspire a new generation of people to try this way of sustainable community life, either living in or attending by day.”

Since its foundation in 1884, St Eugene’s Band has provided Omagh and district with music at public events, concerts, fun nights, church services, and other social gatherings.

Membership is drawn from individuals who are willing to share their time and musical talents at weekly rehearsals and the many public concerts performed at annually.

Many charities benefit from the band's performances as they share with audiences their enthusiasm for playing music. Their band represents the diverse community within Northern Ireland, coming from different backgrounds, faiths, nationalities and age groups, while still enjoying each other’s company and sharing enjoyment of making music..

The Queen’s Award for Voluntary Service aims to recognize outstanding work by volunteer groups to benefit their local communities. It was created in 2002 to celebrate the Queen’s Golden Jubilee.