'Hats On' for Alopecia Day at Omagh High! 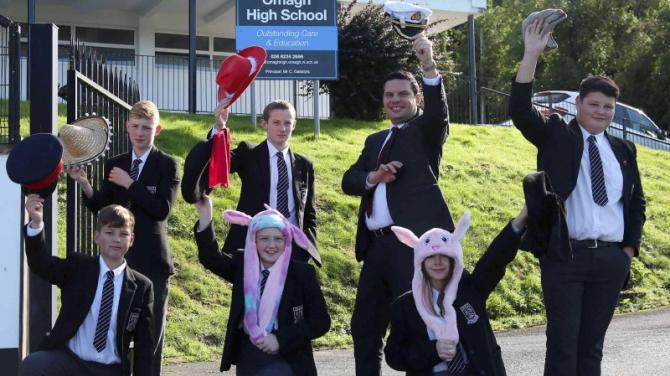 Throughout 'Alopecia Awareness Month' (September),14-year-old Isla McGonigle has been on a mission to remove the stigmas surrounding the autoimmune disorder, after gradually losing her hair over the space of a number of months last year.

And she has been busy in recent weeks - in addition to a feature in the Tyrone Constitution, Isla has been telling her story on her Instagram and Facebook, and has even been interviewed by UTV!

Isla, who sits on the Youth Board of Alopecia UK, is hoping the 'Mad Hatter' day at Omagh High will raise further awareness of the condition, as well as much needed funds for Alopecia UK.

The event will see pupils given the opportunity to wear a hat of their choice - the more eccentric the better - with pupils paying £1 toward the charity.

"I am really looking forward to it and it should be good fun!" She said. "Over the month of September, I have been very vocal about Alopecia through social media, the paper and UTV. I am now hoping this event will raise more awareness as people who aren't at the school will hear about it."

Isla first experience Alopecia in April 2020. By October, her hair started coming out in chunks, and within a few weeks she lost her eyelashes and eyebrows.

Since December 2020, she has been hairless, due to Alopecia Universalis. However, she refuses to let the condition define her and her enjoyment of life.

Isla said: "When someone sees a person with a bald patch, or bald patches, they automatically think it's cancer, and that they are going through chemotherapy. People associate it with illness, but it's not the case at all, and hair loss is the only effect and it's not contagious.

"In general, I am very open about it. Many people cover it up with wigs and hairpieces, and try different hair styles to hide it, but I quickly realised it wasn't for me. I don't wear wigs at all. I have them but I choose not to wear them. I don't see why it should hold me back, it doesn't define me as a person. I am myself and Alopecia doesn't take away from that!"

Of the upcoming event, a spokesperson from Omagh High School said: "Omagh High School pupils will be putting on the style on Thursday 30 September to support an Alopecia Awareness Fund Raiser organised by year 11 pupil, Isla McGonigle.

"Having been diagnosed with Alopecia Universalis during the first Covid Lockdown in March 2020, Isla is passionate about raising awareness of this condition.

"Pupils will give a donation and will wear a hat of choice in school throughout the day on Thursday. They are hoping to raise a substantial amount of money while demonstrating their support for this very worthwhile charity!"

Further information on Alopecia can be found at www.alopecia.org.uk.