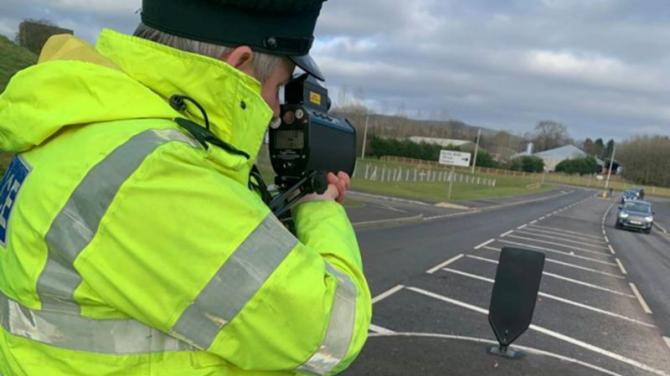 LOCAL roads that are endemic for speeding include the Beltany Road, Doogary Road and Great Northern Road, a local PSNI Chief Inspector has revealed.

Chief Inspector Robert McGowan was speaking after PSNI recorded crime statistics revealed that almost 9,000 drivers were brought to book for speeding in Northern Ireland in 2020, with over seven per cent of all offences occurring in the Fermanagh and Omagh District Council area.

During the same period, only 27 drivers were referred for a speed awareness course in Fermanagh and Omagh, which is offered as an alternative to penalty points and prosecution.

The statistics also reveal that in 2020, the vast majority of speedsters were male across all age groups - over 6,500 men were detected for speeding, compared to just over 2,400 women. Men aged 30 to 49-years-old were most likely to be caught speeding.

Reacting to the figures, Chief Inspector McGowan said the PSNI is continually working to reduce speeding in the area primarily by education, and when necessary, fines and prosecution.

Mr McGowan said: "Officers are out every day patrolling Fermanagh and Omagh to detect speeding and when they come across speeders action will be taken.

"Our starting point is education, and working in cooperation with partners to get the message out. Education is our starting point, and enforcement comes after. When necessary, we do have to take proportionate action.

"Patrols are generally focused on main routes and faster roads, with the highest density of traffic. Local roads include the A5 Beltany Road, Doogary Road, Great Northern Road, and the A32 and A34, Enniskillen."

According to PSNI figures, the highest recorded speed in Northern Ireland in 2020 was 130 mph on the M1 motorway, near Portadown. The motorway has a speed limit of 70 mph, with the driver travelling 60 mph over the speed limit.

Inspector McGowan said: "Speed limits aren't targets that drivers have to strive to achieve. Coming into Autumn, I would also urge drivers to think about their speed as evenings get darker, and as children return to school. The roads are now busier due to the easing of lockdown restrictions, and drivers must be mindful of this in coming months."

"Speeding is one of the top three causation factors of fatal and seriously injured Road Traffic Collisions, and that's why it gets so much attention.

"In 2020, we had one fatal incident in the Fermanagh area. While this is regrettable in that one person killed is too many, this number is certainly lower than other years. Hopefully the education message is starting to get through."