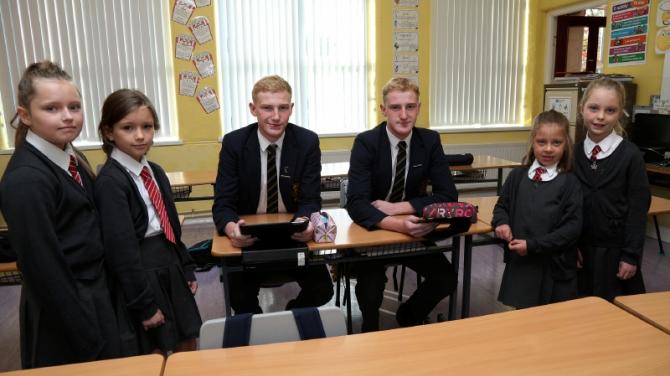 TWO sets of twins from Gillygooley Primary School have much to aspire to, having recently received a visit from twins, Andrew and Alan Carson, former pupils of the school and current head boy and deputy head boy of Omagh Academy.

Last week, Andrew and Alan took a trip down memory lane at Gillygooley Primary School, where they met with the school's two sets of twins, Bella and Tilly Sproule (Primary Six) and Poppy and Mia Barrett (Primary Four).

The Carson twins spent seven years at Gillygooley Primary School before progressing to Omagh Academy, where they were this year named head and deputy head boy.

And, by sheer coincidence, Alan shares his deputy role with Daragh Logan, who also happens to be a twin!

Currently completing their A-Levels, both Andrew and Alan are studying Chemistry, Mathematics, Biology and Geography at A2.

Reflecting on the experience, Andrew said: "It definitely felt strange to be back after such a long time away. Everything felt a lot smaller, because we've gotten a lot bigger!

"Being back for the morning brought back a lot of fond memories, and it was nice to see the other sets of twins. Hopefully speaking to us encouraged them in some way."

Reflecting on his time at Gillygooley Primary School, Alan said: "Even though we were twins at such a small school, we were always treated as two seperate people, rather than 'the twins', and this carried through to Omagh Academy. We are always grateful for our time at Gillygooley, and how this shaped our future at secondary school."

Of being elected into the two top roles within the Academy's Pupil Leadership team, both Alan and Andrew agree it was a "very pleasant surprise", and they said they are both 'privileged' and strive to "set a good example for younger pupils."

"Twins, Andrew and Alan Carson went to Omagh Academy after finishing their seven years at Gillygooley, and this year have been selected as head boy and deputy head boy.

"They called at the school to see the pupils, and hopefully this will encourage and inspire all pupils currently at Gillygooley!"

"The children and staff of Gillygooley Primary School are very proud of Alan and Andrew, and wish every success in their futures."