MAPS founder speaks of pride as finalist in 'Soldiering On Awards' 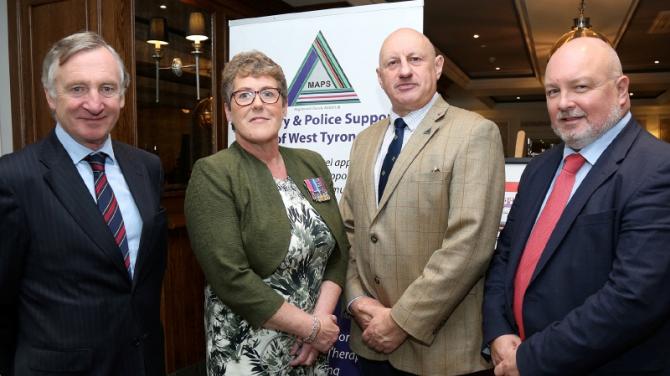 A LOCAL woman has said making it into the finals of the prestigious 'Soldiering On Awards' was a "fantastic achievement for all involved."

Margo Heatherington MBE, a founder of ex-services charity MAPS, made it into the top four in the 'Inspiration' category of the Soldering On Awards, which recognises the achievements of the diverse people and groups who work together in support of the armed forces community.

And while Margo narrowly missed out on the top spot, the Castlederg woman said she is still beaming with pride having made it into the final.

Her achievement follows MAPS, as an organisation, being shortlisted in the finals of the 'Working Together' category of the awards last month.

To mark the occasion, a special event was held in the Silverbirch Hotel last Thursday, where the much-anticipated final was live-streamed directly from London.

The event was attended by Danny Kinahan, Veterans Commissioner, Mark Lindsay, chairman of the Police Federation of Northern Ireland, and organisations including Blesma, The VSS, Brooke House, the RUC GC Foundation and Blind Veterans UK.

Margo Heatherington, the daughter of a reserve constable who was fatally shot in 1978, was instrumental in setting up MAPS of West Tyrone to support former members of the ex-service community.

According to Margo, making it into the final of Soldiering on Awards was not only a fantastic achievement for herself, but for MAPS as a organisation.

"It was a great personal achievement for both myself and the organisation," she said. "It has highlighted MAPS as an organisation in a UK-wide manner, which is truly lovely.

"I was flabbergasted when I was told that I had been nominated. We work very much as a team here, and for someone to pick me out and put me forward, well, I was dumbfounded!

"The finals event was fantastic. Not only was it a live final, it was the chance for our partner organisations to meet with each other, and also an information event.

Margo continued: "Some people have asked me if I am disappointed I didn't win. My answer is not at all, I was so proud to even have been nominated, let alone make it into the final. It has also served to boost the profile of MAPS. It has been a success on all fronts!

"I would like to thank the person that nominated me, and the people that work directly with me, including Richard Scott. I couldn't have achieved this without the support of both my colleagues, and of course, my family."