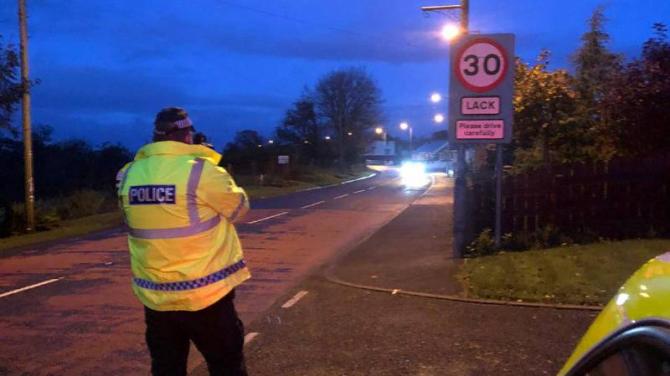 COMPLAINTS about speeding in the Lack area saw PSNI officers carrying out recent speed checks, with a number of drivers brought to book.

According to a local MLA, speeding in the Co Fermanagh village is a "real problem", with previous police speed operations recording cars speeding through the the main street at 90mph.

In response to concerns from residents, police recently carried out speed checks over the space of three days, which resulted in a number of drivers being issued with fixed penalty notice.

The police operation in Lack follows sustained efforts by police in Mid Tyrone to detect speedsters. According to police, a recent LASER operation in Rouskey saw no drivers breaking the 40mph speed limit.

Fermanagh and South Tyrone MLA, Deborah Erskine, welcomed the PSNI's work to reduce speeding, and warned that speeding in the district's towns and villages could result in "loss of life".

"Speeding appears to be a problem in local towns and villages," She said. "When it comes to Lack, there has been a constant problem with speeding.

"In the past I have heard of speed of 90mph being picked up on speed indicators. This is a real problem, and it is a threat to life, especially during dark evenings. Elderly people are especially vulnerable at this time of year, and when speed is involved, the consequences are unthinkable.

"I am fully support police in what they are doing to try and tackle the speed. We need to act to ensure people get their speed down so it dosen't cause problems for people in the village.

"I have spoken to many people that say they see cars just speeding through 30mph zones, and not adhering to newly erected 20mph speed zones at local schools.

"People have to realise that if they insist on speeding, they are going to get caught and will face penalty points or worse. The message has to get through."