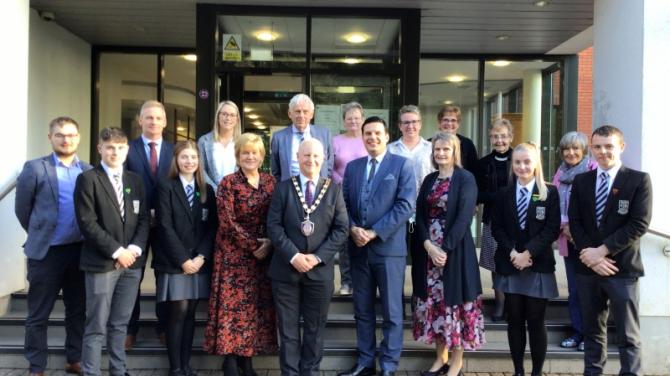 THE chairman of Fermanagh and Omagh District Council, Errol Thompson, who is a former Omagh High School pupil, has congratulated the school on reaching its 60th anniversary.

Mr Thompson was speaking at a special council reception held at the council offices in Omagh, to mark the 60th anniversary of the opening of Omagh High School.

Councillor Thompson said that for 60 years, Omagh High School has been providing a high standard of education and equipping pupils with life skills to help them excel in the outside world.

"What is particularly pleasing for me, is that I have been afforded the opportunity to honour my alma mater in this very special year," he said.

"Omagh High School has served the Omagh community and its hinterland for the past 60 years, providing not only a high standard of education to the students but also providing the necessary life skills to equip them for the outside world.

"It is fitting that we, as the local authority, recognise publicly, the contribution the school has played, not only in the education of our young people but also in the wider community.

"It is hard to believe that 60 years have elapsed since the school in its original incarnation as Omagh County Secondary Intermediate School, opened its doors to almost 650 students under the stewardship of its first principal Mr Leitch. As an aside the school was opened by the then Minister for Agriculture, the Rt Honourable Harry West MP, father of sitting councillor Diana Armstrong.

Councillor Thompson continued: "The world in 1961 was a very different place to the world we live in now. The Cold War was in full flow, John F Kennedy was inaugurated as the 35th President of the United States, the Berlin Wall had been built effectively partitioning Germany into East and West and the Russians won the space race by putting Major Yuri Gagarin in space. Against that international backdrop, here in Omagh, a new era in secondary education was being born.

"Like the world, the school has changed significantly in the intervening years. I am sure that former teachers and pupils would have noticed many changes since their school days, most of them for the better. However, there is no doubt that the challenges presented by Covid-19 over the past 18 months have led to a challenging environment with schools closed and classes being delivered online. There was the added burden on teachers of having to grade students for 'A' levels and GCSE’s based on projected grades which was quite a challenge. Like all other schools, the pupils and teachers of Omagh High School had to adapt and in many ways are still adapting to a new normal.

"The school has enjoyed representation in this chamber in some form or other over the years. Indeed, one of your former teachers and my former party colleague, the late Oliver Gibson, served the people of the area with great distinction for over 20 years. I now hold the seat which Oliver occupied for so many years.

"As I alluded to earlier, the school has undergone significant changes in the recent past. It has shown a willingness to increase the choices for its students. It now boasts a thriving sixth form and offers a wide number of 'A' level courses both singularly and in partnership with other schools. This type of partnership is extremely beneficial to everyone and I believe that this sort of working arrangement will become the norm.

"The way education is delivered has changed significantly none more so than in the last year and a half and this undoubtedly proved a challenge for educators. I know that Mr Gaitatzis and his senior management team, supported by the Board Of Governors have taken all measures necessary to ensure that Omagh High School is best placed to adapt to meet those challenges and will continue to go from strength to strength.

"On behalf of the council and on my own behalf, I would like to congratulate you on reaching this milestone and wish you every success for future."