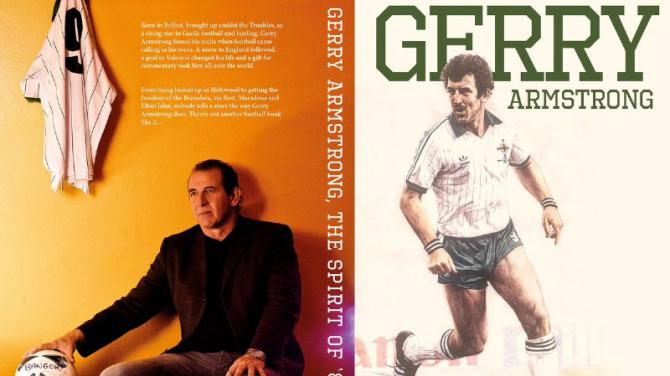 BORN in Fintona before moving to Belfast, getting a dream move to England and becoming a fully-fledged Northern Ireland international, scoring his country's most famous goal - it has been quite the journey for Gerry Armstrong. And soon you'll be able to read all about it in the former football star's autobiography, released later this month.

'My Story, My Journey', will be released on November 22 and tells the story of how Armstrong, a dedicated Gaelic footballer with little interest in soccer aged 17, was soon snapped up by English giants Tottenham Hotspur following a spell with Bangor.

He would enjoy a hugely impressive career, spanning over 15 years, also playing for the likes of Watford, Real Mallorca and West Brom, winning 63 caps for Northern Ireland and scoring 12 goals in the process.

Armstrong is most famous for scoring the winning goal over hosts and tournament favourites Spain at the 1982 World Cup to send his country into the knockout stages of the competition, the moment repeated every time Northern Ireland play.

His achievements in the sport are well-known throughout the world, but did you know his father was born in Fintona and still lives in Omagh?

His father, Gerald, was a hardworking man, born on a farm at Aughafad in Fintona where he spent his early years working on the fields with his father.

Gerry remains a frequent visitor to Tyrone, where he spent many of summer on the family farm in Fintona.

The visits to Tyrone spark Gerry's fond childhood memories of playing with his friends and family in the countryside of Fintona. Gerry, who was then a talented GAA player, having played for Antrim's senior team at the age of 15, even played a couple of games for the Fintona club, scoring a few points.

Locals will be delighted Gerry shares such memories in his new book, which is being published by Curtis Sport.

"I started my autobiography well over a year ago during lockdown," he explains.

"It has been good fun. There are some funny parts in it, stories about my childhood of the late 50s and early 60s, going into detail about how I got into football in the first place. But there are also a lot of truth to home stories as well.

"I spent all my summers in Fintona and I talk about all the ins and outs of farm life in Tyrone.

"I wasn't really into soccer until I was 17 when I started playing for Bangor. There are lots of different stories about my time at clubs such as Tottenham and Watford.

"There is a huge chapter about my time with Northern Ireland, especially the squad of '82, playing against the likes of Norman Whiteside, Sammy McElroy and all the fun we had along the way.

"It's a great read and there is plenty in it for football fans, big time. Pat Jennings wrote the foreword for me, he was my roommate having roomed with George Best for 10 years. And I talk a lot about George in the book, explaining how I became friends with him and how he got me started with Sky Sports."

To pre-order the book, visit www.curtis-sport.com