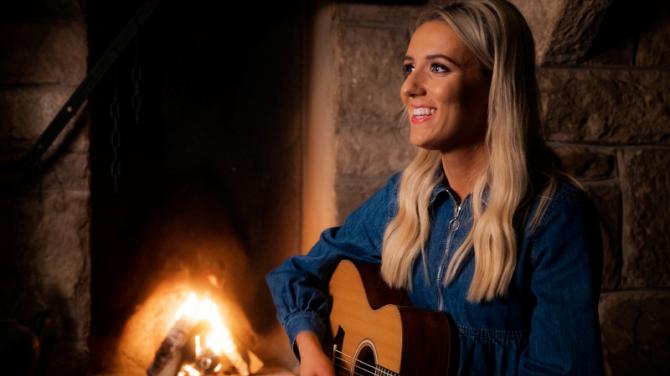 IN DAYS gone by, the perennial hearthstone was a feature of most any Irish home, serving as a meeting place for family and friends to tell tales, sing songs and ceilidh.

And it is this endearing feature of folk tradition that is the focal point of Greencastle singer, Ciara Fox's first album, 'From the Hearthstone', featuring her own enchanting vocals and instrumentals and a score of musical talent from a host of local collaborators.

Set for release in December, when the cold winter winds will see hearths lit once again, the album is sure to warm the hearts of listeners, paying homage to the long-standing traditional of folk music in Omagh's rurality.

The release of the album will be accompanied by Ciara's first ever solo concert in the Strule Arts Centre on December 2, which promises to be an unforgettable night of music.

And with a packed itinerary of performances on the cards with well-known musicians on coming months alongside her concert and album release, it's fair to say the Greencastle's singer's future is as bright as the hearthstone fire that gives her inspiration!

"It's all really exciting," Ciara said. "The title of the album is personal, as I have always had visions of people gathering around the hearthstone in an old Irish cottage, singing songs and telling stories. I feel this imagery really ties in with the folk style of my music.

"Releasing an album has always been a real ambition of mine. I really enjoyed making the EP in July, and wanted to push onwards and take things to the next level. It dosen't seem real that I will soon have my very own album out there!

"For the album, I have had the privilege of working with some really talented musicians, including Matt McGlinn of the Guitar Studio, Omagh, who put it all together for me, and also played electric and acoustic guitar on it.

"Overall, it was fantastic to get the chance to work with such fantastic musicians. I can't wait for the release date to show people all the hard work that everyone has put into the album.

"I am also looking forward to my first ever concert. I am hoping to get involved in the concert scene so hopefully this will be a taste of what is to come!"

Following the lifting of lockdown restrictions, recent months have seen a welcome return to normality - albeit 'a new normal' - for singers such as Ciara.

"It's great to be back out and to see a return to some sort of normality," she said. "I have been back performing at weddings, and I have also been doing stuff with Black Water Kaley band, and I am supporting Niall Hannah in the empire in Belfast in December.

"There are a lot of exciting of things on the horizon!" she concluded.