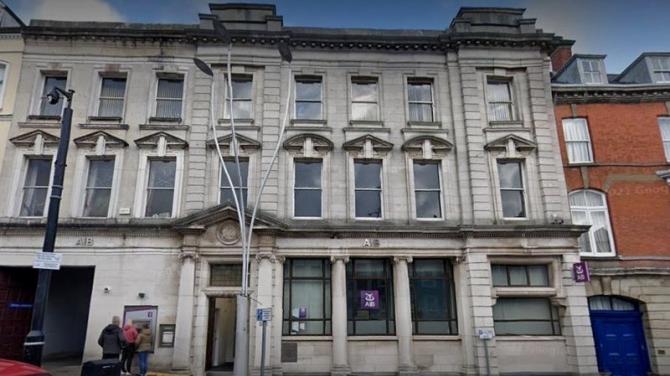 THE closure of a bank in Omagh town centre last week has been described as a "backward step" by a local MLA.

The DUP's Tom Buchanan was speaking after AIB in Omagh, formerly First Trust, closed it's doors for the final time on Friday, despite despite widespread public outcry in recent months.

The dreaded closure followed an announcement by AIB in July of this year, stating that the Omagh branch would be one of eight brick-and-mortar branches to close this month.

In the aftermath of the closure, the Consumer Council has urged customers of the bank to review their banking needs. Currently, AIB customers can carry out basic banking transactions, including deposits, free cash withdrawals and balance checks, at local Post Offices including Market Street, Campsie Road and Tamlaght Road.

Speaking on the closure, Scott Kennerley, director of Financial and Postal Services at the Consumer Council, said: “Whilst many consumers and businesses in Northern Ireland have made the switch to online or mobile banking, we know that some still prefer to use cash and rely on face-to-face banking through their local branch.

“Consumers in this area who do not feel comfortable with online or phone banking can continue to visit their nearest Post Office to pay in cash and cheque's, withdraw money, and check their balance.

"Basic banking services is something the Post Office provides for all banks in Northern Ireland. Alternatively customers can visit any other Bank of Ireland branch or could consider switching their bank account.”

Mr Buchanan has called on AIB to support elderly and long-time customers following the closure of the Omagh branch.

"In many ways this is a backward step by AIB," he said. "The Omagh branch is situated right in the middle of the county town of Tyrone, which is by all accounts a town where where there much footfall.

"Yes, it's true that the way people bank has changed, but the new ways don't suit everyone. There are quite a lot of people, especially from rural and urban areas, who much prefer face-to-face dealings in the bank. Elderly people are especially used to going into the bank to do business, and recent events will no doubt be devastating for them.

"Overall, it's disappointing that the bank has failed to take on board the opposition and reasoning as to why they should stay open. In the run up to festive period, this will cause difficulty for many, many people in the area as they get to grips with online banking.

"In general, it's difficult to know what to advise elderly people, and indeed longtime customers of AIB, about what they can do now. Yes, ATM cash withdrawals are still possible, as are facilities at the Post Office, but these options simply can't replace the face-to-face banking that customers know and trust.

"It is my opinion that AIB has failed customers. Customers are now faced with the prospect of traveling to either Enniskillen or Londonderry for personal banking, and this is set to have a huge impact on people from West Tyrone.

"I am calling on the bank to provide some kind of help for their customers. Even something like a day or two per-week mobile banking arrangement would be a huge help to customers, who have been essentially deserted by a bank that they have been loyal to for decades."