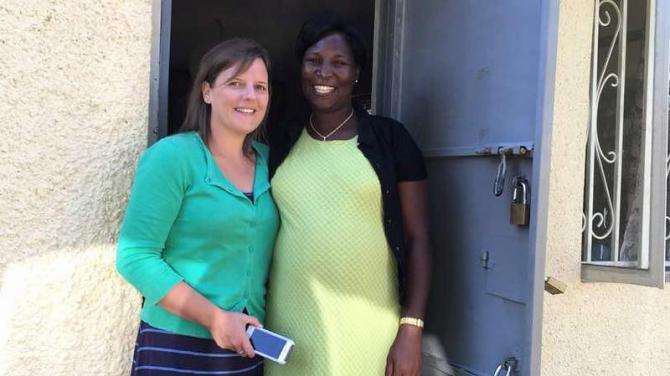 RHONDA Smith was highly thought of as a teacher at Augher Central Primary School for over 10 years, and while it's a job she enjoyed immensely, as a Christian, she felt God had a different path set out for her.

That path has taken her some 6,000 miles away to poverty-stricken Uganda where she has been working since 2016, training early-years teachers and helping to improve the lives of children.

She has swapped her comfortable surroundings of rural Tyrone for Mbale, a city east of the country, close to the Kenyan border.

While the people are warm and friendly, daily life here comes with its challenges.

During the course of her interview with the Tyrone Constitution, the electricity in the one-bedroom house Rhonda is living in had gone off - and to make matters worse, her phone battery was about to die!

Not that she panicked, however, as Rhonda explained it is a regular occurrence and thankfully the power came back on a short time later.

It seems a world away from Augher Central Primary School, where she began teaching in September 2006 after graduating from Stranmillis College.

"When I first started at Augher, teaching P5, 6 and 7, it was just a two-teacher school," explained Rhonda.

"I was only supposed to be there for a year but I ended up taking up the acting-principal role, which I held for four years!

"In June 2010, Andrea Sawyers was appointed teaching principal. By that stage, the school had grown and we were able to hire another teacher.

While it was a job she loved, the thought of missionary work had always been in the back of Rhonda's mind, so, in January 2015 she finally took the plunge and travelled to Uganda for a six-month trip where she was placed with a small organisation called JENGA to carry out some teacher training.

"It felt like a really good fit and I'm still with them now," said Rhonda.

"It's a small Christian charity that does gospel and development work side-by-side."

That short period had only whetted Rhonda's appetite for helping in Africa. In September 2016, she applied for a four-year career break from Augher Central PS which was granted.

She had a decision to make recently - Stay in Uganda or come back to Augher. She chose the former.

"I made the decision to move to Uganda based on my faith - I felt God led me here in the first place," continued Rhonda.

And she feels that her work - which involves teaching children simple phonics and literacy - is far from finished.

"Probably around 70 per cent of children will leave school with a P2's reading age," she said.

"The government has recognised this and is really trying to address early literacy.

"We have trained close to 300 P1 to P3 teachers across 60 government schools. There are many other private schools, however, unfortunately, we do not have the resources."

The education system in Uganda, for those lucky enough to have access to it, keeps children safe while they are in school, but teachers have the most difficult of jobs.

"One teacher can have up to 100 pupils in one classroom," explained Rhonda.

"The teacher literally has her chalkboard and not everyone always learns that way so unfortunately a lot of children can get lost.

"The schools have very little resources and although they're government-subsidised, there are still things like uniforms and other basic things the families cannot afford which means, unfortunately, a lot of children aren't able to go to school."

And, sadly, many children who regularly attended school before the pandemic have not been able to go back since March 2020 due to Covid-19 - although it is hoped pupils will return to the classroom in the new year.

Rhonda spent much of her time during lockdown in her small house where she was fortunate enough to have access to internet to work from home.

Her surrounds are far from luxurious but the former Augher woman is content. This is a basic lifestyle, there's not a lot going on, but she enjoys mixing with her neighbours, even if the community has been significantly reduced with many other volunteers flying back home during the pandemic.

"There's a very small missionary community here and there are some international volunteers from America, the UK, Germany, Netherlands," she said.

"It's a very transitional community.

"The local people are very warm and friendly, although sometimes there can be communication difficulties. On the whole, however, they are very gracious."

Uganda made the headlines across the world last month when rebels - who have pledged allegiance to the Islamic State group - killed at least three people and injured 30 in a suicide-bomb attack in the capital Kampala.

Thankfully the area where Rhonda lives is "pretty safe", although security has become a "little tighter" since the atrocity.

Rain has failed for two seasons in parts of neighbouring Kenya, leaving families without enough food and water. And while Uganda is preparing for its dry season, thankfully there has been enough rain recently to avoid disaster.

Having been away from Tyrone for over five years now, does Rhonda miss home - and would she ever plan to come back?

"I do miss friends and family and the home comforts," she responded.

"I miss certain seasons, like Christmas. Sadly I'm not coming home this year for the festive period.

"But I'm making a life here and when I come back home there are certain things I miss about Uganda.

"At some point, yes, I would like to come home. But for now, I'm just taking it a year at a time."