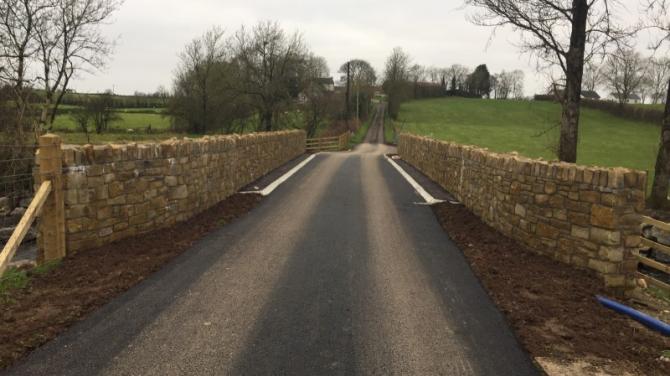 A WEST Tyrone MLA has welcomed the long-awaited completion of a bridge replacement scheme near Sixmilecross.

In total, £260,000 was spent on replacing Bracky Bridge, situated on the Dreenan Road, Sixmilecross, after it was destroyed in a freak flooding event in 2017.

On Monday, the bridge, which is a single span reinforced concrete structure with masonry parapets, was reopened to the public after a long period of closure.

The construction of the new bridge presented the opportunity to build a wider structure with improved road safety standards, and also has improved river flow through the structure to reduce the likelihood of flood damage in the future.

Speaking on the bridge reopening, West Tyrone MLA., Daniel McCrossan, said: "It's great to see the completion of work on a £260,000 bridge replacement scheme for Bracky Bridge, Omagh.

"Thanks to Nichola Mallon for resolving the issue and providing this funding."

Of the completion of the successful project, Infrastructure Minister, Nichola Mallon said: “It is great to see work completed on the bridge and I am pleased to say that it officially opened again to road users on Monday, December 20.

“This significant investment to replace the bridge will benefit everyone who uses it. I would like to thank the public and especially the local community for their patience and co-operation while the bridge was closed."