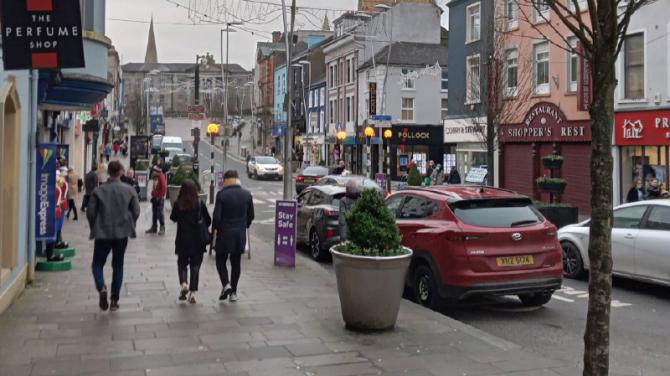 WHILE the immediate future is uncertain in regard to restrictions and closures, local retailers in Omagh have been making the most of a seasonal upsurge in trade as shoppers flock to finish their Christmas shopping.

And while the threat of the new Omicron variant is a definite talking point across the district at present, festive shoppers have been keen to make the most of present normality in their unwavering support of local businesses.

Bolstered by the NI Executive's successful High Street Voucher Scheme as well as council-led incentives, it appears that the tills have been ringing in tandem with sleigh bells in Omagh.

According to Marty Woodhead, of Active 2 Sportswear, a decision by the council to ditch it's showpiece festive switch-on in favour of an ongoing series of festive events in Omagh has paid dividends, resulting in busy streets throughout December.

"There has certainly been an excellent buzz around town lately, and I believe that the council's decision to have ongoing events instead of one big switch-on was the right one," he said. "It brings something extra into the town, and the festive cheer has been ramped up with bright lights, live music at night, and other Christmas events.

"I also can't fault the High Street voucher scheme. It's been an absolutely brilliant incentive that has brought people into the town, and it came at a time when times are tough for families. It just gave them that bit of extra relief and spending."

Meanwhile, Katherine Watterson of Wattersons, Omagh, said the High Street Voucher Scheme was a 'welcome boost', and while the scheme has now closed, the business is looking forward to seeing many additional customers in the run up to Christmas.

"We are delighted with how the shop local vouchers have encouraged many people to spend on the High Street," She said. "It was a very welcome boost to business, as it can be quite a quiet time before Christmas trading starts.

"We are very thankful to everyone who chose to spend their vouchers in Wattersons, and we are very happy to see them in person once again!"

And while stimulus from the NI Executive has provided retailers with a boost to their festive takings, the ongoing support of the public cannot be forgotten. Colm Sharkey, of Just Vape on Foundry Lane, said local people have 'rallied around' retailers.

"In the current climate, local people themselves have rallied around, and they have really done their bit. Trade has been good considering the adversity. We haven't seen much of a downturn.

"The High Street voucher scheme was a big help, and although that is finished, we are open right up to Christmas Eve, Four O'Clock!

And with the ongoing support of loyal customers, Brenda O'Donnell, of House of Vixen, Omagh, is pleased to report that said festive footfall has saw the shop 'very busy'!

"Trade has been really good and the High Street Voucher Scheme really helped boost it significantly," She said. "We have been very busy and the tills have been ringing. It has been a challenging year, but the Christmas rush is helping to make up for that.

"Last week was our busiest, with people rushing out to spend their vouchers," Brenda added.