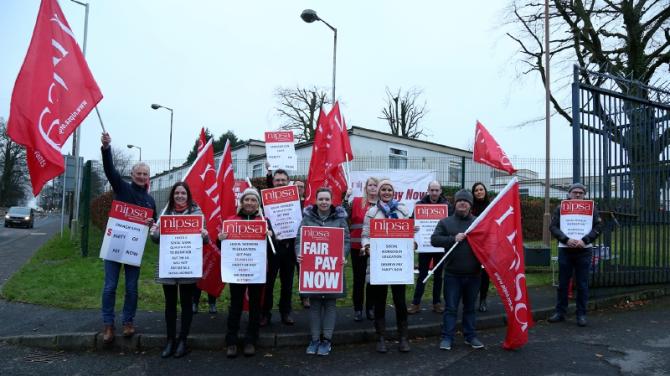 PAY disparity with counterparts in other sectors has left social workers employed by the Education Authority (EA) feeling "demoralised and undervalued".

This was the stern assertion of Dolores Austin, an EA Education Welfare Officer, who spoke to the Tyrone Constitution at recent strike action in Omagh, hitting out at significant pay shortfalls within the Education Authority.

At present, Education Welfare Officers (EWO), which is the job title given to social workers employed by EA, are being paid £5,000 less than their counterparts in the likes of the NHS, despite the fact that all roles across all sectors require the same qualifications.

The recent strike brought forward by the Trade Union NIPSA was the 15th day of action at different locations in Northern Ireland, with EWO's taking to the picket line to demand fair pay.

Last week's events followed previous strike action in May of this year. Despite this, according to Dolores Austin, the concerns of EWO's are still being ignored.

"We lodged a parity of pay claim just over two years ago," she said. "We are getting paid just over £5,000 less than social workers in the health sector, and this disparity has been growing every year. We are taking home nearly £500 less per month, and despite meaningless commitments from management to resolve this pay dispute, they haven't offered us anything that has taken us close to what we need. We have been forced to take this step."

According to Dolores, the pay parity situation has caused recruitment and retention difficulties within the Education Authority, with qualified social workers seeking better-paid job opportunities in other sectors and organisations.

"The situation has caused huge retention and recruitment difficulties, because so many staff are leaving to go to the health sector," she said. "But who can blame them? £5,000 is a lot of money, especially when the cost is living is rising rapidly. We are asked to do more and getting paid less, and this is placing huge stress on us. In short, we are feeling demoralised and unvalued.

"We were at the front line through the pandemic, and supported young people, schools, and families throughout Covid. Yet, we have been treated with very little respect and value for the social work role we do.

"We work with the most vulnerable children in society, who are living with mental health problems, anxiety, and thoughts that life isn't worth living. The waiting list for services is growing. In our team alone there are 250 on the waiting list. Pay issues are seriously impacting this frontline service.

"Overall, the mood is very determined. We aren't stopping until we achieve pay parity. We deserve to be treated equally, and all we ask is that the Education Authority and the Department of Education act in a reasonable manner, and pay us what we deserve."

Also in attendance at the strike was West Tyrone Sinn Féin MP, Órfhlaith Begley. She has called on the Education Minister, Michelle McIlveen to provide pay parity for Education Welfare Officers.

"Education Welfare Officers are once again having to take industrial action after doing so in May 2021," Begley said. "They are formally striking to highlight their campaign for pay parity with their colleagues in the Health and Social Care Trusts.

"Today I have spoken with Education Welfare Officers on the picket line who are beyond frustrated that they are being paid £5,000 less than those with the same qualification who are employed as social workers in the health service.

"The difference in salary between these sectors is resulting in staff leaving the Education Authority to obtain better pay and detrimentally impacting on a frontline service that works directly with some of the most vulnerable children in society.

"I have once again written to the Education Minister and the Chief Executive of the Education Authority to ask them to prioritise ending the pay inequality."