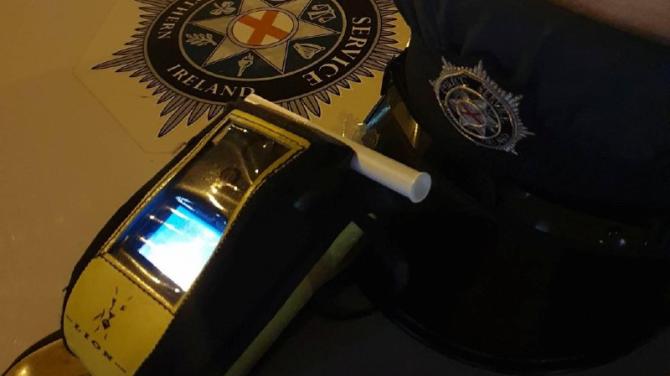 POLICE have urged local people to under no circumstances drink drive this festive season, following a number of arrests in the district in recent weeks.

In the run up to the New Year, police have been conducting numerous roadside breath tests in Omagh and beyond, which have led to several arrests of over-the-limit drivers.

And while nightclubs are all but closed and pubs now have restricted numbers due to Covid-19, the police crackdown on drink driving is set to continue in coming days and into the New Year, with the message from police clear - "Never ever drink and drive".

Speaking on the recent breath tests, a PSNI spokesperson said their drink driving could result in loss of licenses, jobs, and lives.

"Over the last few days the night crews in our district have had several arrests for drink driving," the police spokesperson said. "Our message is very simple - Never ever drink and drive.

"When you get behind the wheel after drinking it’s not just you that may get hurt, it’s the innocent motorists using our roads on a daily basis, it’s that person walking to the shop to get some milk. It’s even that group of school kids walking to school.

"If you drink and drive you will lose your license, could lose your job, not to mention higher insurance premiums. All for the cost of what could have been a taxi fare home."

West Tyrone MLA., Tom Buchanan, has echoed the PSNI's calls, and has urged revelers to ensure they have lifts and taxis organised before attending venues.

"Drink driving is always a big issue around the festive season, " Mr Buchanan said. "I commend the police on the extra resources they have put in to this during this time.

"The law is very clear - no-one should drink and drive. It is a major cause of accidents, and as we have seen, fatalities. Over the years, people have lost their lives due to drink driving, and the message needs to get out as loudly and as clearly as possible - people should under no circumstances get behind the wheel of a vehicle once they have drink in their system.

"I am making a plea over the festive season and into the New Year for anyone who is going to go on a night out - make arrangements for a lift before.

"If a person is under the influence, they aren't in control of the vehicle, and they aren't fully alert to the conditions of the road. It's inevitable that an accident is going to occur. Drink driving is extremely dangerous and shouldn't be a consideration for anyone."

Meanwhile, local Alliance Councillor, Stephen Donnelly, has warned that while the New Year will allow many chances for fun and socializing, it must be done "safely and responsibly".

"As we head into the New Year period there will of course be plenty of chance for fun and celebration, but as always this must be done safely and responsibly,

"I would encourage people that if they are planning a night out to preplan their transport arrangements home in advance, and I would reiterate the strong message from the PSNI that no matter the situation, no matter the excuse, there is no justification for getting behind the wheel of a car after drinking.

"As a community, we have been through a great deal this year, and we owe it to ourselves to have an enjoyable festive period. Let's make sure we enjoy it safely and responsibly."