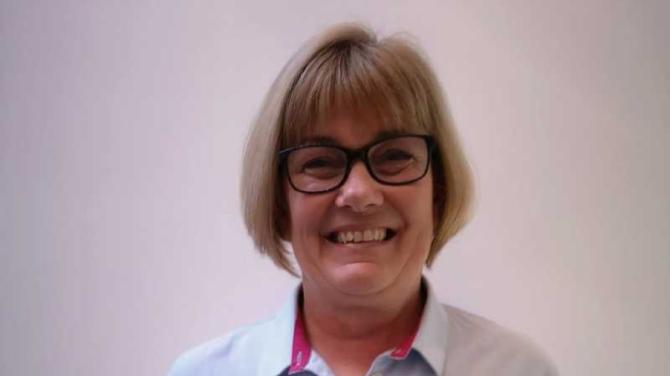 "THE pleasure I have had seeing hundreds of girls from the age of three and four-years-old pass through Girl Guiding and grow into women has been wonderful."

These are the words of Drumquin's Jackie Moore who has been awarded an MBE for services to Girl Guiding in Northern Ireland.

Jackie first became involved with Girl Guiding in 1969 - or the Guide Association as it was known back then - at the age of eight when her parents first moved to NI from England.

To help her integrate into the community, Jackie joined 1st Magherafelt Brownies.

"I got the Girl Guiding bug and never left from there," she smiled.

When Jackie got married in 1984 and subsequently moved to Omagh, she enquired about the Brownies "again as a way of integrating".

However, she was asked by the then-District Commissioner, Ivy Turner, if she would consider starting up Bunnies for three to seven-year-olds - as they were known as then (now Rainbow Guides) - because Omagh didn’t have a 'Bunnie Warren'.

"A few years later as the unit grew I helped set up 2nd Omagh Bunnies (Rainbows) and both have been going strong ever since."

Jackie fully retired from the unit in 2016, handing it over to her daughter, but she still got called upon occasionally.

She continued: "I’ve worn 'several hats' over the past 40 years at all levels but my main role was always with 1st Omagh Rainbow Unit where my heart really lay.

"At district level, I was District Commissioner for Omagh District overseeing five units and supporting approximately 20 leaders where I could who in turn managed around 120 children within their units (Rainbows, Brownies and Guides). This post I finished in September 2021.

"I coordinated an annual Carol Service run by Omagh District Scouts and Guides where the proceeds went to local children’s charities where possible. This, unfortunately, had to stop due to the Covid pandemic.

"I also helped out with Strabane District as they were without a District Commissioner for a while at division level which covers Omagh and Strabane. I was an ID verifier which meant I had to oversee certain parts of checks required by all leaders for child protection.

"I’ve mentored potential Rainbow leaders, been County Queens Guide Coordinator, keeping a record of those that have completed their Queens Guide, which was the top qualification available to a Guide. "

Jackie has also held the post of County Registration Secretary, keeping a manual record of all the leaders qualifications, long service awards etc as well as fees that came in for the entire county.

She has also been the County Leadership Coordinator, supporting leaders to complete their qualifications and seeing to their needs, and she has been county representative on Ulster Council for Girl Guiding.

In March 2016, she was awarded a Girl Guiding Ulster Award for “Oustanding Service and Dedication to Girlguiding locally.

At UK level, she sat on a 'task and finish' group - a two-year post 'Welcome to Girlguiding'.

"I have as a Rainbow Guide Unit leader piloted new programmes and sleepovers for Rainbows.

"I’ve undertaken quite a few trainings in mentoring, first aid, catering, Child Protection (Safe Space) on top of regular trainings associated with Rainbow Guides and being a District Commissioner.

"I have organised several large scale events for Rainbows at Ulster level celebrating Rainbow anniversaries and Girl Guiding Centenary and included taking over Belfast Zoo for a Day.

"I have also been heavily involved in Fun days and Camps at Ulster, County and District level for Rainbows Brownies Guides and Leaders."

"These were all amazing events to have had the pleasure to lead and bring with them amazing memories which I will cherish forever, she said.

"I’ve been part of a trip with County Leaders to Mexico to one of our World Centres (Our Cabana) in 2007 which included giving street kids a day to remember and helping local villagers to build their houses, a truly amazing experience."

On receiving the award, Jackie said she felt very overwhelmed but admitted it was exceedingly humbling.

"I feel I am accepting it on behalf of hundreds of people and I am just the privileged person being allowed to look after it.

"If it were not for Girl Guiding, the girls I was charged with, my family, my friends and ex-work colleagues I would not have been able to avail of the opportunities and experiences that presented themselves to me nor been able to help give them to so many girls and women.

"I am just a very small piece in a very large jigsaw with so many people around me to support me.

"I want to thank my parents first and foremost for getting me involved in the organisation all those years ago, to Mervyn my husband who had no choice but to accept that Girlguiding was going to be a big part of our lives and he has supported me all the way.

"Even when the kids, David and Karen came along, Wednesdays were known as Bunnie/Rainbow Days. All three of them allowed me to pursue my passion for Girl Guiding.

"Girl Guiding has given me so much over the decades and more than most people will ever know. It has helped to mould me into the person I am now, by giving me friendships, life skills, confidence and fun to name but a few.

"To accept an award for having fun can’t be bad and is so surreal.

"Finally, thank you from the bottom of my heart to whoever took the time and effort to nominate me I have been truly humbled."